Adventure Iran is specialize in outdoor adventures of all types of activities ,we hope you can take the time to read about all we have to offer, as well as one of our company major services, desert activities and tours.
Our goal is to give you an appreciation of the desert. We have been dedicated to our goal for 10 years. During those years we have taken out more people then all of the other tour companies combined. Many of those guests have come back year after year to enjoy this fun, exciting, desert adventure.

Our guides are trained professionals who are experts. They are what make our adventure tours so memorable. Our company takes good care of their employees and they in turn take good care of our clients, we always received positive feedback from the folks who have enjoyed our unique desert experiences.
Iran is one of the few remaining destinations where there is still the freedom to travel distances, timeless and by choice, sleep in remote-wilderness or formal-camp, explore central desert and  distant dune, enjoy total relaxed or high adventure. Iran is a country blessed with endless contrast, where you can discover fascinating facts about desert plants, animals, geology, history, culture and life style with interactive displays and exhibits to bring your tour to life.

Come relax and enjoy the spectacular beauty of Iran central Desert, One of the vast and amazing deserts in the world. Four wheel through remote areas or camel trekking where the beauty and serenity of the desert come alive. Let our local guide introduce you to the wonders of the desert flora and fauna, as well as give you a genuine appreciation of the delicate balance of life in the desert ecosystem. Imagine trekking and cross the desert like old time where you will find a natural spring flowing from the side of the heart of dune.
Desert tours are passionate about Iran, we offer you Join one of our group Adventure Iran tours and find out why.

For more information about our Iran desert tours. 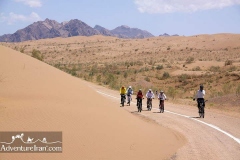 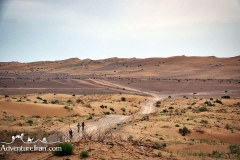 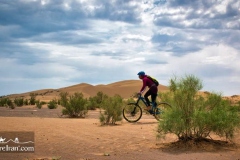 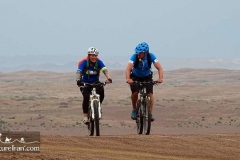 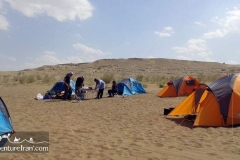 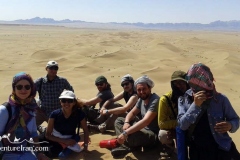 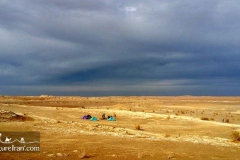 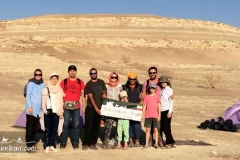 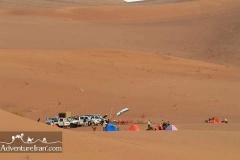 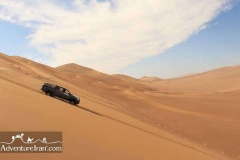 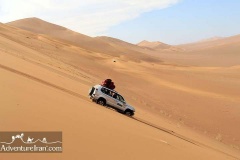 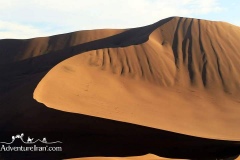 The deserts in Iran are probably its main attraction. These deserts are vast and spectacular covering 25% of the entire country. The two main ones are Dasht-e Kavir and Dasht-e Lut, both being gigantic.
Dasht-e Kavir, also called Kavir Desert, Iran Central Desert, or in Persian Kavir Markazi-e Iran is situated to the south of the Alborz Mountains approximately in the center of Iran.
Lut Desert also called Dasht-e Lut, Kavir-e Lut or Dasht-e Lut Desert is situated in the south-east of Iran. It is also one of the two UNESCO natural sites of Iran that were registered in 2016.
You might have visited deserts in other parts of the world but, by comparison, Iran’s deserts are a combination of them all in terms of natural attractions. They are made up of sand dunes, flat desert areas, salt lakes, dry lakes, wetlands, rock formations, canyons, rivers, various mines, birds, animals, flora, caves, high mountains and diverse coloured soils surrounded by villages.
It’s possible to find a cluster of oases with agricultural areas in the middle of nowhere where you never thought there could be water. People still follow their customary way of life and live in their traditional houses.

There are numerous citadels in these deserts dating back to over one thousand years. There is also an abundance of historical villages with special desert lands and Persian architecture built several hundred years ago. There are countless ancient Qanat “underground water channel systems” in many of Iran’s deserts dating back thousands of years. The Persian Qanat was registered in 2016 in the UNESCO heritage sites of Iran, which is one of Iran’s historical phenomena.
Persian cuisine is another attraction of our deserts, as you can find a wide variety of Iranian food on every corner. As you may know, Iran was along the main part of the Silk Road when the size of the country during Silk Road times was even bigger than it is now. We had a few seasonal Silk Road routes here where one of the main roads passed through the Dasht-e Kavir desert. Plenty of remnants of this historical and fascinating route have been left behind for us to see but unfortunately, the major part of this route has been destroyed. In the books of Alfons Gabriel, an Austrian Geographer, explorer and travel writer, a special square tile was mentioned which was found on the route of the Camel and the Silk Road. There were a couple of camel breeding centers in our deserts too as the camel trade was one of the main Persian businesses at that time.
We still have more reasons to convince you why the Iran desert is so important and unparalleled. One of the main icons which makes Iran totally different from other deserts around the world is Iran’s Caravanserais. The number of these caravanserai is unimaginable. These are a further indication of the existence of the Iran Silk Road and its location. Adventure Iran is presently researching the background of these Caravanserais to provide more information on these safe havens together with their cultural impact
The Persian Gardens are another attraction of Iran; they were registered on UNESCO’s world heritage site list in 2011. The Persian Gardens are visible from every corner of the desert of Iran. UNESCO has designated nine main Gardens on its list. Six of these Gardens are situated in our deserts, which are just one of the incredible phenomena that exists.

The name ‘desert’ always makes us thirsty, making us imagine a place without any water or flora; so this question comes to our mind: ‘how can we have water in the desert to build such striking gardens?’. The answer is the Persian Qanat which is another UNESCO World Heritage Site registered on the list in 2016. Qanat is a type of underground irrigation system between an aquifer on the piedmont to a garden on an arid plain. There are eleven Qanats in Iran that are designated on UNESCO’s list.

There are numerous historical houses still existing in the deserts of Iran during the Silk Road era. The architecture varies depending on the age of the house. Several have been renovated to serve as traditional boutique hotels.
Other highlights of our deserts are the various climatic changes and temperatures which are incredible. The Iran Central desert’s temperature is quite different from that of the Lut Desert. Lut Desert is one of the hottest places on earth according to NASA research. Adventure Iran has created and carried out a desert safari with a 4×4 to cross the Lut Desert, as mentioned, famous for being the hottest place on the planet. We conduct this adventure tour during late autumn, winter and early spring.

Around a hundred years ago two famous geographers, explorers and travel writers “Alfons Gabriel and Sven Hedin” crossed the Iran Deserts by camel writing very interesting books about their dynamic, adventurous journeys
These books are one of the references Adventure Iran is using to start researching Iranian deserts. We have already added a couple of spots on their journey that are mentioned in their books to our tours, which we pass during our trip in the desert. We have also created two different tours under the name of the two famous travel writers: · Sven Hedin’s footsteps in Iran Central Desert · Alfons Gabriel Trek