Iran is a country of many talents. From south to east you can find a variety of Handmade objects to use, decorate your house with or simply observe and enjoy. Some of them go way back, the first Persian rug (and the first found rug in the world),Pazyryk carpet, is nearly 2500 years old, some of them can’t be bought anymore, like miniature art, and some of them have been lost in the years. Fortunately, in the hands of the locals most of the authentic crafts of our nation has survived and has been passed along the generations.

Handicrafts are the soul of a country, you can learn about the history and culture of a whole society just by observing their handmade. They’re like a backbone for nearly all of the nomads in Iran (Financially) and act as a middleman between tribes.

Nearly each town in Iran have its own handicraft. But in the list below you can read about some of the most famous handicrafts in Iran:

Hands down the Persian rugs and carpets are the most famous handicraft of Iran. After the speculations of Pazyryk carpet, scientists have found documents indicating carpet trading by Iranians to China that can make Carpets the first exported goods in Iran. Baharestan, Ardabily and Shekargah (Hunting ground in English), are the names of the other famous rugs in Iran with a unique history for themselves.

Generally Persian carpets are divided into two main sections, loom woven and vertical loom woven. Loom woven carpet use an older technique and most of the nomads still use it to weave their rugs. Zilu, Jajim, Termeh (although it is mostly used as a table cloth) and many more are under this section. In the vertical loom section as the name suggests a vertical handloom is used to weave the carpets and only rugs and Kilims are woven this way.

Some of the more famous places in Iran that do this beautiful work are Naein, Qom, Kashan, Tabriz and Turkish nomad tribes.

On the other sections we have a lot of diversity, to name a few, Jajim is mostly done in central Iran or Turkish or Kurdish nomads, Meybod (a city in Yazd district) is known by its Zilus and also Yazd has a worldwide reputation for its Termehs.

This is just the tip of the iceberg, Iran has a lot of woven goods that can make for a gorgeous collection or make you house look like a new place. 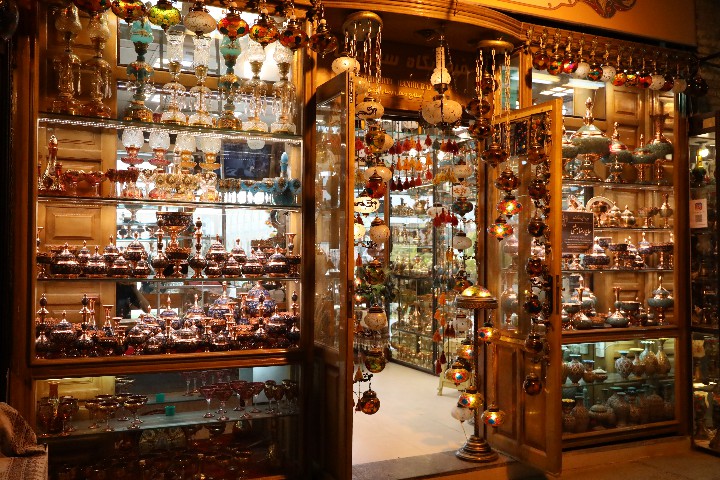 Glass has had a hand in every culture, from china to the Middle East to Europe and America, it has been one of the key components in day to day lives of many generations. Islamic glassware is the first thing that comes to mind when you think of the history of glass in Iran but it goes way back as we have found traces of it through Achaemenid dynasty and even older in the ruins of  Teppe Hasanlu, Shahr-e Sukhteh and Shush.

Nowadays, many of the ancient techniques have been forgotten and many more have taken their places. In cities like Tehran, Meymand, Jahrom and Ghamsar glass workshops are still active and making them mostly using the glass blowing technique like casting, Mould-blowing, Pattern-moulding and tralling.

Traditional made glass is hard to find but it is worth the search. 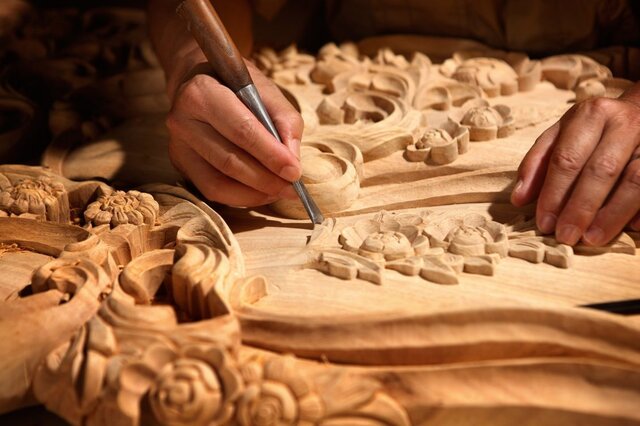 Because of the decaying nature of wood, there aren’t many wooden tools or decorations found by archeologists. Carpentry is one of the highly regarded arts in Iran and carpenters are one of the treasured artists in the country. Wood was mainly used in day to day lives of the people without any decorations on it making canes, furniture, spoons and kitchen utensils, hair brushes and many more things.

Decorations were used by the wealthy and kings and in buildings using techniques like Owrsi, Mogharnas, Gereh Chini (Girih tiles) and Looneh Zanboury (Meaning “like a bee’s hive”). This techniques can be seen on many mosques and palaces in Iran.

But as the common people got wealthier, interior wood decoration like turning, carving and burning wood, Marquetry and Khatam became more accessible and one of the most liked handicrafts among the local people.

Instrument making is another important branch in this category. Music has a rich history in the land and handmade instruments like Tar, Kamancheh, Setar and many other wooden instruments are being made with great sounds and qualities.

As one of the oldest arts in Iran, evidenced by found goods near Tepe Sialk and Tepe Hissar, pottery has an outstanding number of pieces discovered. Early potteries found in Iran has a unique shape and structure, leaner and cleaner than its time, even traces of the first potter’s wheel is found from Tepe Sialk near Kashan.

Tile designing started thriving after the Islamic period and in the influence of the Chinese and was mostly used in buildings (Outdoor and indoor). The designs and patterns used on most of these pieces are magnificent and breathtaking. Nearly all the architectural works done in Iran, from ChoghaZanbil Ziggurat to Qajarian palaces, have made use of tiling in their structures, but as the connections between the countries started, techniques were adapted so patterns became more complicated and tile structures became more stable.

Nowadays, both of this industries have major brand working throughout Iran But in some cities like Lalejin (which is the capital of pottery in Iran), Meybod, Isfahan and Hamedan you can still find traditional workshops to shop from or even see it in real life.

Fabric dyeing techniques were mostly adapted from other Middle East countries (mainly China and India). Kalamkari, Batik and felt making are the 3 main techniques used in Iran to design and use fabric (although felt making has a long history of usage in iran, as fabric for cloths and as carpets and rugs, and it’s still in use for many tribal clothing). Traditional dyeing is being used today in local workshops and traditional clothing.

In cities like Isfahan and Tabriz, reside most of the masters of these arts. Batic as you may know is a form of wax-resist dyeing that is used on silk. And Kalamkari is free styling on the prepared fabric which needs quite the precision. Unfortunately duo to fabrics getting imported, many of the working workshop closed down and a handful of handmade pieces can be found today.

Leather making is another industry in Iran that is being used from the old days. Beside the rural areas that still use it as a necessity, it has become an inseparable part of Iranians lives and everyday life with many brands working with great quality and designs.