Darbandsar ski resort in Iran is one of the main ski resorts in the country, located in Darbandsar village, northeast of the capital. From Tehran, it is only 65km away and takes one and half hours to reach it.

The history of the piste goes back to around the time of the Iran Islamic revolution. Before the revolution, many local skiers traveled to Europe for the ski championships.  With the help and support of a few ski enthusiasts from various countries, decisions were made to create a new ski resort in the Alborz Ski Region. They bought a brand-new lift from the Poma company in France in 1978.   This lift was kept in Iran’s customs control for a period due to the timing of the revolution. This project was suspended until things had settled down so it took longer than originally planned.

After a few years, actually, at the beginning of 1982, the Darbandsar piste was born. Subsequently, the locals bought more ski lift equipment to improve the piste and make it more advanced and keep pace with other pistes in Iran. The altitude is 2600m to 3600m.  This piste, as mentioned, is located in the Alborz ski region in the Central Alborz Mountains.

Darbandsar ski resort was originally a small piste in Iran. Fortunately, it now belongs to a private company that developed the region and purchased new ski lift equipment.  It is fast increasing in size, overtaking Shemshak and Tochal pistes. Nowadays Darbandsar is an important and well-known ski hub for Iranian skiers. It is also becoming more popular with locals.

The season starts from early December to the end of April and when there is a large snowfall, the season continues up until May. During the season, the piste is open every day. During the Iranian weekend, which falls on Thursdays and Fridays, the pistes are so busy as many Iranians who live in the capital come to Darbandsar to ski.  It is worth mentioning that the road will be especially busy on Friday afternoons when everyone wants to travel back to Tehran. Apart from people coming from Tehran, a lot of others have apartments in the region.  Some have taken out temporary residency to be enabled to stay there during the winter months to take advantage of the excellent skiing in the Alborz Ski Region.

The main slope of the piste is wide and its height from the peak has an approximate 1000m vertical drop.

Darbandsar piste has two restaurants. At the base of the piste, after the entrance, there is a large restaurant with a remarkable view of the piste up to the peak. The second restaurant is in the middle of the ski resort with access via a gondola.

There are no hotels or chalets inside the piste or in Darbansar village. The closest accommodation is the Shemshak Tourist hotel which is 6 km away from the piste and located in Shemshak village. Moreover, there are a few local houses and private apartments in Shemshak, mostly belonging to locals.  These can be rented. They offer an alternative for skiers who would like to be in touch with the locals and the village dwellers.

There is a ski school inside the piste with various ski instructors. They have ski guides for beginners and also professional ski instructors for advanced-level skiing. Prices change from year to year due to inflation, so it is advisable to ask for the latest charges before committing.

There are a few ski shops before the entrance gate of Darbandsar piste which have a wide range of new skis, boots, clothes, and poles for rent. They also have different ski sizes and children’s clothes for youngsters who want to ski. Unfortunately, there is not any Ski-Touring equipment for rent in Darbandsar. If you are interested in doing backcountry skiing or Ski-Touring in Iran, you must bring your own skis. 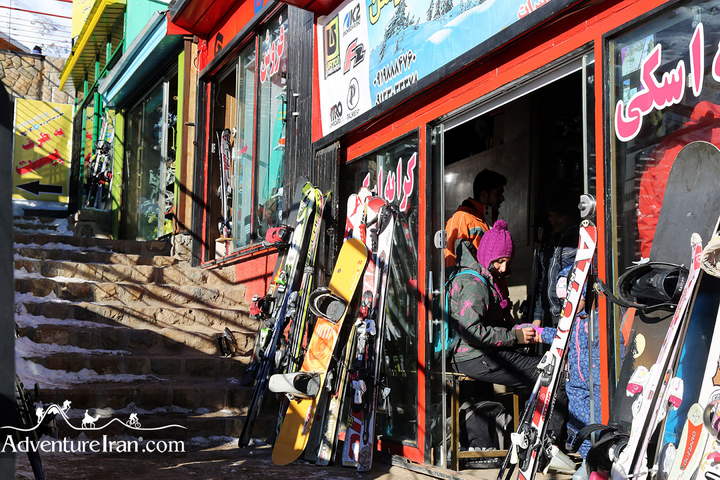 Some instructors or locals do off-piste skiing when skiing on the piste, but it is not permitted for other skiers unless the following conditions are met. To be able to participate, you have to apply for authorization from ski patrols or hire a local guide, as some parts of the piste may be in danger of avalanches coming from different directions.

One of the most amazing off-piste skiing paths is the Dizin-Darbandsar-Jirood ridge route which is one of the outstanding places where you can have powder skiing in the Darbandsar area.

How to get to Darbandsar:

Darbandsar is located in the northeastern suburb of Tehran province. It is on the boundary between Tehran and Alborz provinces on the southern slopes of the central Alborz mountains. From the center of Tehran, it is only 65 km, a one-and-a-half hour drive, to reach the ski resort. There is a local bus located in the northeast of Tehran in Shaghayegh Square.  There are a couple of departures a day for Darbandsar and return. From there, it takes only one hour (45 km) to reach. Their timetable changes every season. The name of the road is Fasham-Shemshak-Dizin road which is situated in the Roodbar Ghasran district. The best and easiest solution to reach Darbandsar is to hire a private taxi straight from Tehran.  The taxi also uses the same narrow mountain road.  It crosses through a few canyons and towns to reach this region.

Apart from skiing and Ski Touring activities during wintertime, Darbandsar and the villages around are perfect destinations for hiking and mountain biking during spring, summer, and early autumn. For more information, please click here. 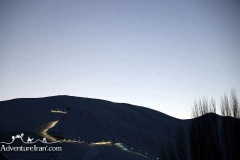 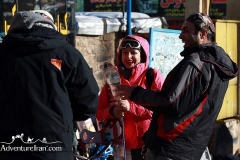 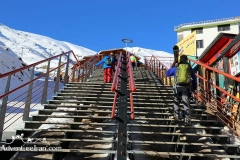 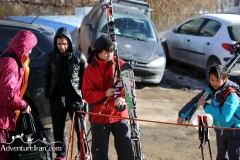 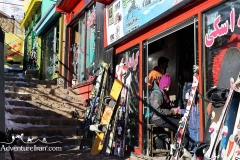 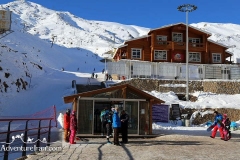 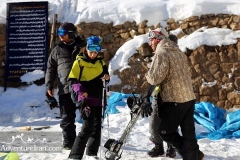 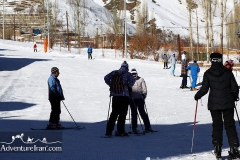