Sistan and Baluchistan province is in the south east of Iran on border of Afghanistan and Pakistan. To the south of the province is the Indian ocean and the Gulf of Oman. This province is about the size of Switzerland, the Netherlands, Belgium, Denmark, Slovenia combined. So there’s a fair amount of driving from the north to the south of this province. This province has 1,100 km a land border with Pakistan and Afghanistan and it has a coastal stretch of 300 km along the Indian Ocean’s Gulf of Oman. The people who live here are the Baluchi tribes who are Suni Muslims and the Sistani tribes are Shi’a Muslims, they both speak Persian.

The Sistan and Baluchistan province is really amazing with huge contrasts between the deserts, snowcapped mountains, and strange rock formations, an active 4,000 m volcano, Martian scenery and cliff enclosed fishing villages along the coast, tropical rivers with the rare Mugger crocodile. It’s Iran’s least known destination yet one of the most beautiful parts of our country. An example of one of the places you shall visit is the famous UNESCO listed (in 2015) Shahr-I Sokhta or “Burnt city” founded around 3200 BC situated at the junction of Bronze Age trade routes crossing the Iranian plateau. Another region we are going to visit on this trip is Dasht-e Lut desert. One of Iran’s main highlights, in terms of nature. Since Iranian deserts were on the Silk Road, there are many historical monuments and sites left from that period that are worth visiting. There are many different types of flora and fauna living in this hot region and many Caravanserais that still accommodate travelers like you. The Lut desert was added to the UNESCO World Heritage List in 2016.

The massive Mt. Taftan situated near the Pakistan border in the south east of Iran. Mt. Taftan is a lonely active volcano mountain of Iran and located in Sistan and Baluchestan province, which is 70 km from the Pakistan border. The nearest city is Khash which is in south of the mountain. Taftan mountain has a couple of famous summits and Chehel Tan peak (Madehkuh) with 4050 mates from the sea level is the highest one. Iran has a lot of mountains over 4000 m but this mountain is one of the famous Iran’s peaks with because of its a lone mountain in corner of Iran, active volcano peak and attached to Dasht-e lut desert.

From Zahedan, the capital city of the province, there is only 130 km distance to each the base camp. Taftan has a mountain range and the total length of the range is 12 km with a couple of high peaks. The ranges surrendered with untouched nature and there are rivers, lakes, trees, plants and many animals live around the mountain. On top of the Taftan mountain range there are three lakes. Two of the rivers has white and fresh water and one of them has salty water. The base camp of the mountain has 2500m height from the sea level and the shelter has 3228 m height. Taftan peak is not a technical mountain to climb. Most of people with good level of fitness cam hike up to the peak. From March to November you can climb to the mountain and the best time to climb is in April and May.

Taftan volcano mountain is sub range of Iran volcanic arc, together with volcano Mt. of Bazman, also in Iran, and Sultan Kuh (Koh-i-Sultan) in Pakistan. This Iran volcanic arc has created on Cretaceous-Eocene sedimentary layers and has resulted from the subduction of the oceanic Arabian plate beneath Iran at the Makran trench.

Snow-capped Taftan volcano towers above surrounding arid terrain in eastern Iran. The strongly eroded stratovolcano has two prominent summits. The volcano was constructed along a volcanic zone in Beluchistan, SE Iran, that extends into northern Pakistan. The higher, 4050 m SE summit cone is well preserved and has been the source of very fresh-looking lava flows. Highly active, sulfur-encrusted fumaroles occur at the summit of the SE cone.

Taftan is a strongly eroded andesitic stratovolcano with two prominent summits. The volcano was constructed along a volcanic zone in Beluchistan, SE Iran, that extends into northern Pakistan. The higher SE summit cone is well preserved and has been the source of very fresh-looking lava flows, as well as of highly active, sulfur-encrusted fumaroles. The deeply dissected NW cone is of Pleistocene age. In January 1902 the volcano was reported to be smoking heavily for several days, with occasional strong night-time glow. A lava flow was reported in 1993, but may have been a mistaken observation of a molten sulfur flow.

This trip is a combination of mountain trekking, Dasht-e Lut desert exploring and Zahedan sightseeing. You will depart from Tehran and continue with night train to Zahedan (25 hours-1500 km) in the south east of the county. You will have three different activities:

You start your journey from Tehran with a long train to Zahedan. Then will visit Zahedan, the capital of the province which is different with the most cities of Iran. Afterward, you will drive to Dashte Lut desert to explore and walk in the desert.  Then you will ascend to Mt. Taftan (4050 m) that is the only active volcano mountain of Iran located in south of Zahedan. At the end you will fly to Tehran to visit Tehran and the tour will finish there.

If you are still curious to do more adventure in this amazing province, you can continue this journey with our one-week extension trip on the Gulf of Oman in the Indian Ocean in the city of Chabahar in the southeastern corner of Iran. For more information, please getting touch.

Day 1: Arrival in Tehran & check in

Upon arrival in Tehran, you will be met at the airport and a representative will greet you and transfer you to a comfortable hotel in Tehran. Overnight stay at hotel.
2

After breakfast in the hotel you will be free for a couple of hours and will transfer to the train station to take the train to Zahedan city. Today you are in the train and we are enjoying the landscape of the road and continue the journey towards Zahedan. Total length is 1500 km takes 25-26 hours in the train. Overnight stay in the train. (B)
3

You will arrive in Zahedan in the morning and you will transfer to the city center to leave your stuff in at the hotel. Today we have a full day city tour of Zahedan. We will visit the regional museum of southeast Iran as well as exploring of old bazaar to get in touch with the lifestyle of the people. In the town, there is a very important masque which belongs to the Suni population of Zahedan and we will have a short drive out of town for visit of this mosque. We will back to the town and have lunch in a local restaurant around the bazaar and you will have a new taste Baluchi food. Then we spend a couple of hours in bazaar and see the lifestyle of local as well as buying some stuff as a souvenir. In the evening we will have a traditional dinner in a local restaurant. Overnight stay in a hotel in Zahedan. (B, L, D)
4

Today you will drive towards west and you will start your desert adventure from an unknown village in the east of the Dashte- Lut desert. Full day in the desert and walk through the sand dunes and explore a couple of villages. After sun set drive back to Zahedan. Overnight stay in a hotel in Zahedan. (B, L, D)
5

Early morning breakfast and drive towards south direction to reach Tamandan village which is mount Taftan base camp. You will drop your extra stuff and start hiking to the high camp on Taftan mountain. Overnight stay in a shelter. (B, L, D)
6

Early morning rises up and after a quick breakfast continue hiking toward to the peak takes 5-6 hours. After 1 hour’s rest and lunch at the peak, descent to the base camp and overnight stay in a local house in the village. (B, L, D)
7

After breakfast in the hotel you will have one day Tehran city tour and according to your flight time in the evening or mid night you will transfer to IKA airport to fly back to your country. 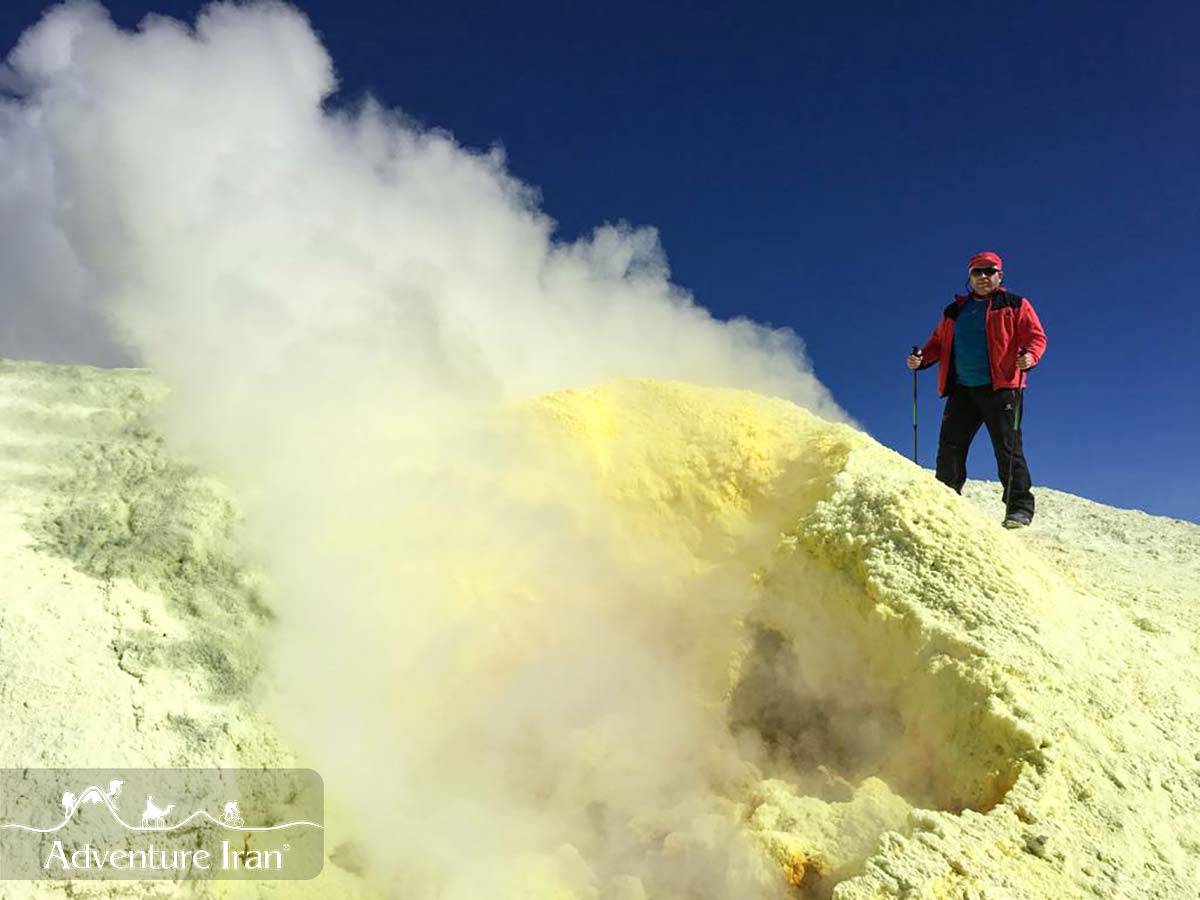 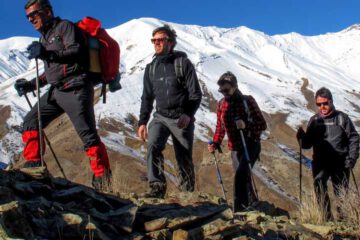 Hiking in the North of Tehran in Central Elburz Mountain 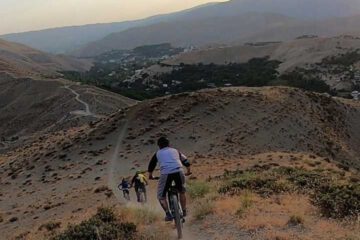 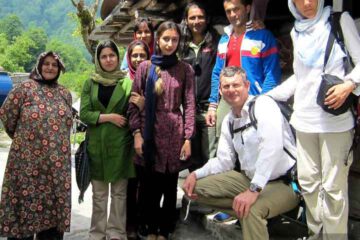 The Valleys of the Assassins