Capital and largest city of Iran and Tehran Province in an area of 600sq. km. since 200 years, is located in the northern part of the country. Tehran is Iran’s administrative, economic, and cultural center as well as the major industrial and transportation center of the region. The city sits on the slopes of the Alborz Mountains at an elevation of about 1210 m., on the northwestern fringes of the Dasht-e Kevir, a desert in central Iran. Most of the growth is channeled along an east-west axis and toward the south, to the north, the city is constrained by the steep Alborz Mountains. Most commercial and government buildings are located in the center of the city. Residential structures predominate elsewhere. The climate has marked seasonal contrasts, with short springs and autumns separating cold winters and hot, dry summers. 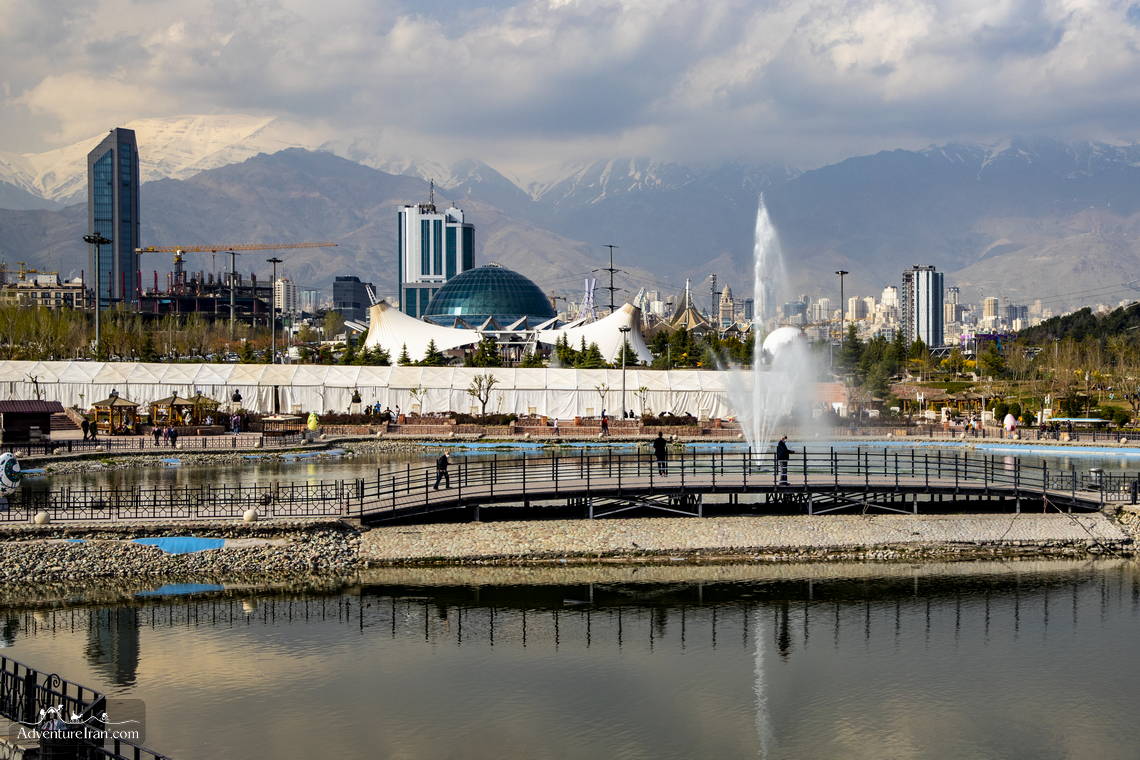 Tehran is the latest and the largest capital city in the 7000-year history of Persia, as Iran was called by many people in the west before 1935. The original settlement of Tehran, north of the ancient city of Rey, may have been founded as early as the 4th century. By the early 13th century it was a small village. In 1221 invading Mongols led by Chenghis Khan destroyed Rey, but Tehran survived and grew slowly in the following centuries. During the reign of the Safavid Shah Tahmasb (1524-1576) a wall and four watchtowers were built around the city, and by the early 17th century Tehran had about 3000 houses. In the 1720s Afghan invaders attacked Tehran. The town defeated the initial Afghan force but fell to the main Afghan army and suffered tremendously under their occupation from 1723 to 1729. Nader Shah freed Tehran in 1729. In 1788 Aqa Mohammad Khan, founder of the Qajar dynasty, made Tehran his capital, inaugurating the modern history of Tehran. At this time Tehran‘s population was estimated to be 15,000. Under the Qajar dynasty (1786-1925), Tehran grew in population and size, and new administrative buildings, palaces, mosques, and garrisons were constructed.
In 1925 Reza Shah Pahlavi seized control of Iran and accelerated the gradual concentration of government functions and commerce in Tehran. The city walls were torn down, wide streets were cut through the old districts, and commercial strips grew along the new streets, challenging Tehran‘s once-dominant bazaar. A newer, wealthier section of the city developed on the north, and a distinct rift was created between modern, northern Tehran and traditional, southern Tehran. This trend continued through the rule of Mohammad Reza Shah Pahlavi, who ruled Iran from 1941 to 1979. In 1979 Tehran was at the center of the uprisings that toppled the Shah, and the city suffered minor physical damage from the unrest. Revolutionaries held more than 50 U.S. citizens hostage in the U.S. embassy in Tehran from November 1979 until January 198 1. The capital was also the target of numerous Iraqi strikes during the Iran-Iraq War (1980-1988).
Archaeological Museum One of the most exciting discoveries in recent Iranian archaeology was this majestic statue of Darius the Great found December, 1972, inside the palace gatehouse at Shush (Susa). It is the first known large-scale statue in the round from Iran of the Achaemenian period, and shows the king dressed in the Persian manner similar to the king dressed in the Persian manner similar to relieves at Persepolis. Inscriptions in Egyptian hieroglyphics, Old Persian, Elamite and Acadians identify the statue as being Darius 1, and state that it was made in Egypt. The head is missing, and it remains uncertain whether the king wore an Egyptian or a Persian crown. 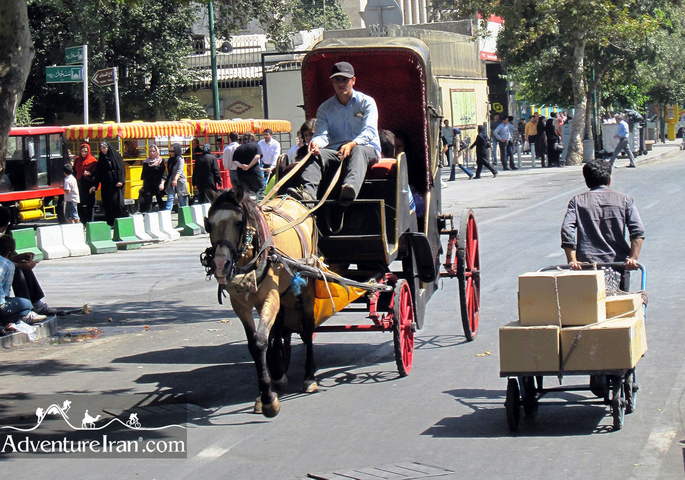 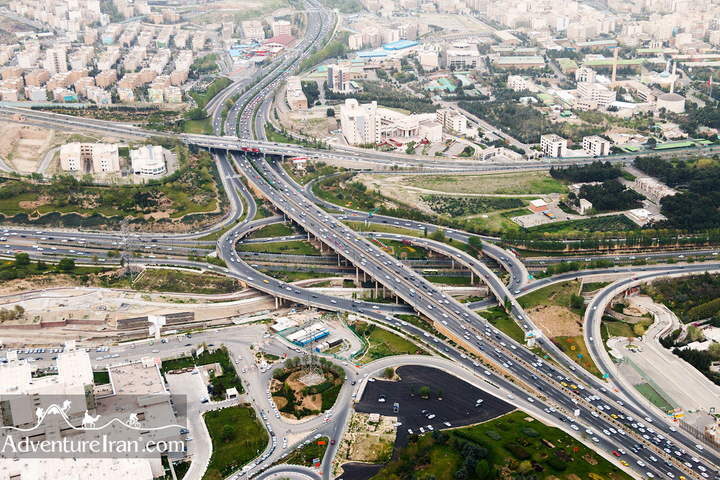 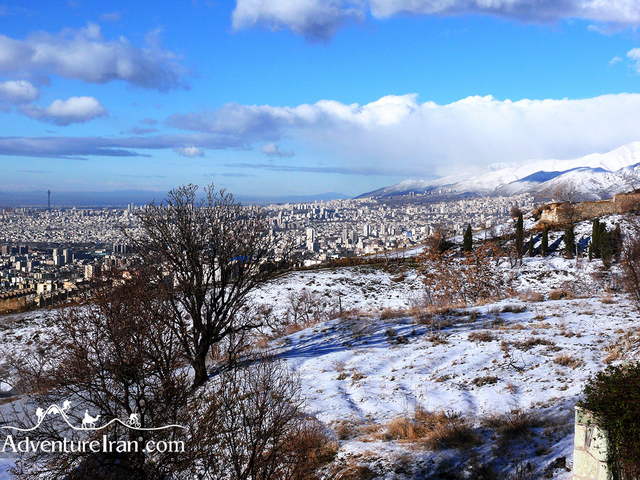 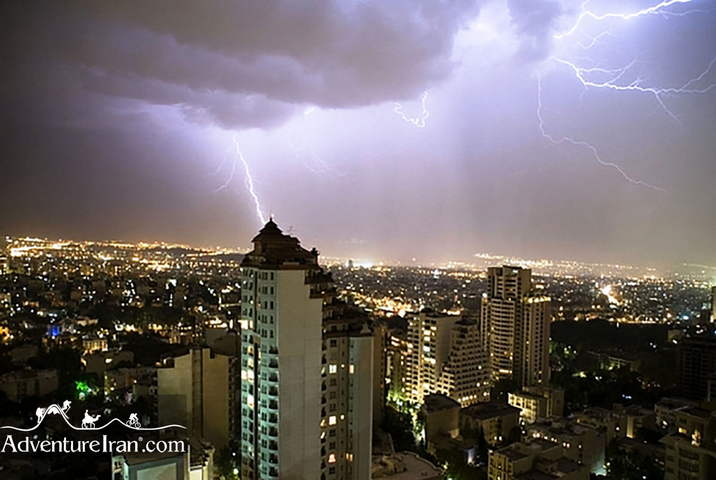 night view of thunder and lightning in Tehran 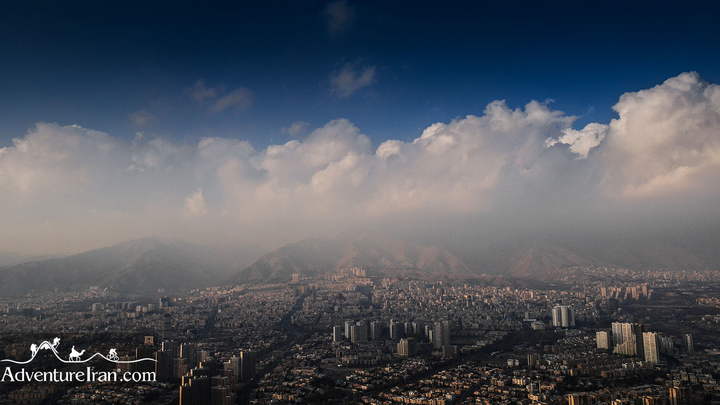 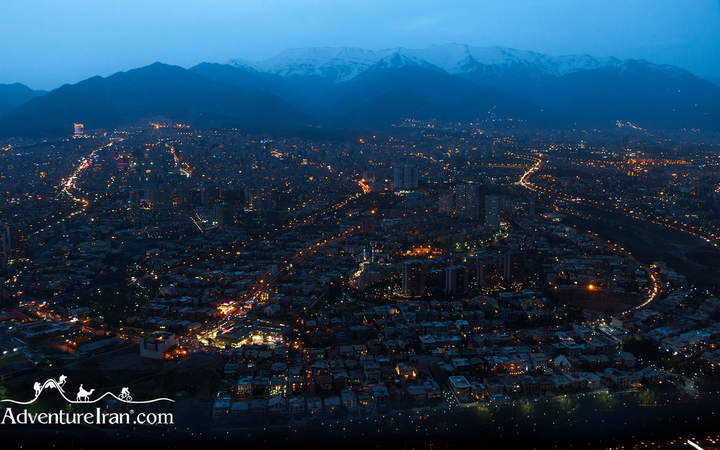 Darius the Great ruled from 522 to 486 B.C., and built a canal from the Nile River to the Red Sea along which this statue may have been transported on its way to Shush. Linguistic and stylistic peculiarities of the statue suggest a date for its carving during the latter part of the reign of Darius, about 490 B.C. 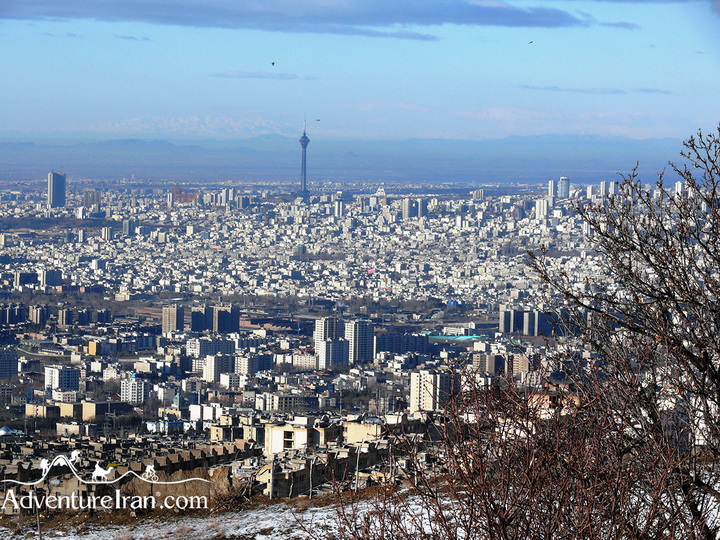 During the reign of the Safavid Shah Abbas 1, a vast garden called Chahar Bagh (Four Gardens), a governmental residence and a Chenarestan, (a grove of plane trees), were created on the present site of the Golestân Palace and its surroundings. Then, Karim Khan Zand (17491779 A.D. ) ordered the construction of a citadel, a rampart and a number of towers in the same area. In the Qajar period, some royal buildings were gradually erected within the citadel; for instance, in 1813 which coincided with the fifth year of the reign of Fath Ali Shah, the eastern part of the royal garden was extended and some other palaces were built around the garden, called the Golestan Garden. 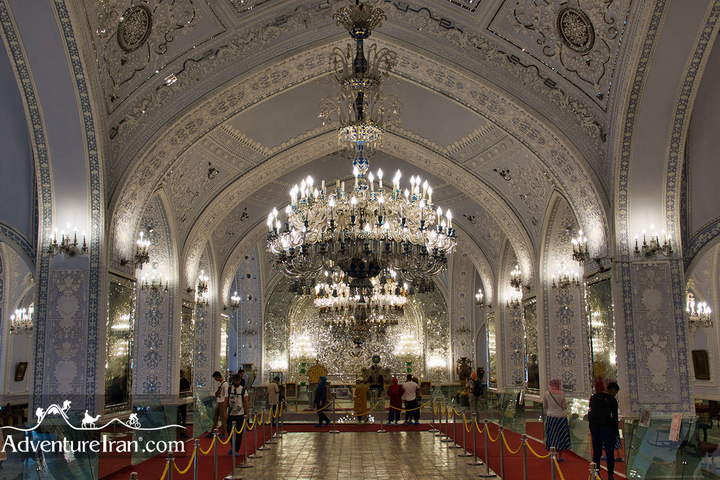 The Takht-e Marmar (Marble Throne) structure was built by Karim Khan Zand between the years 1747 and 1751 A.H. that is in the first three years of his region. Aqa Mohammad Khan Qajar (1779-96 A.D.) decided to have it perfected. In (1791 A.D.), following the order of this Qajar king, a great deal of building materials, pieces of painting and decorations, belonging to the Royal Palace of Karim Khan, were removed from Shiraz to Tehran to be used in the Takht-e Mannar edifice. Upon the orders of Fath Ali Shah Qajar, in (1806 A.D.) a big marble throne was made which is now to be found in the center of the main iwan of the palace. The actual name of the Marble Throne is ” Takht-e Solayman”. All around the iwan, there remain lots of paintings and decorations belonging to the Qajar period. After Fath All Shah’s death, the other Qajar kings followed the example of their ancestors in perfecting the decorations and adorning the buildings of the Palace. 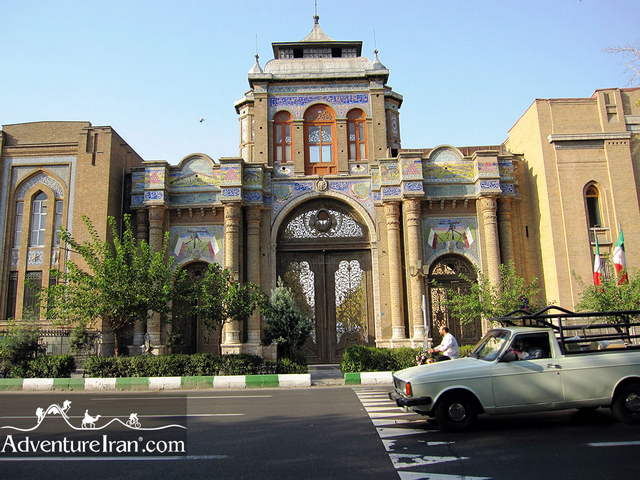 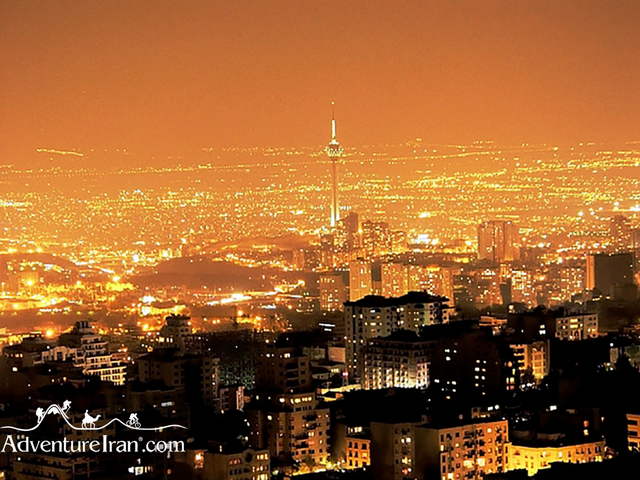 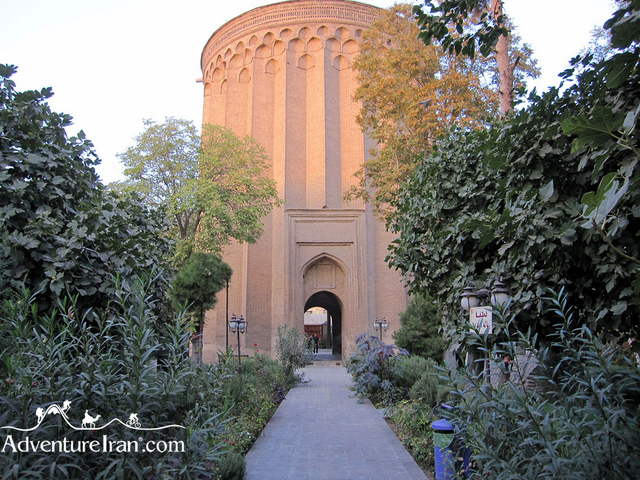 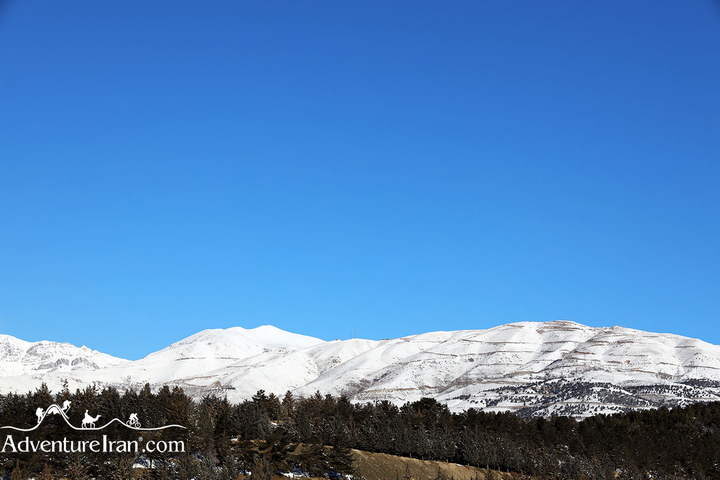 Mount Damavand, the highest mountain in Iran, has for centuries attracted mountaineers, nomads and legends to its snow-covered slopes. The epic hero Fereidun wrestled and defeated the evil giant Zahhak, chaining him to a cave on the mountain peak. Villagers living near the base of the volcano still remark that Zahhak is straining to be free at the first signs of smoke or rumblings often heard deep within the mountain. On a clear day, the 18,600-foot cone is visible from Tehran, fifty miles away. 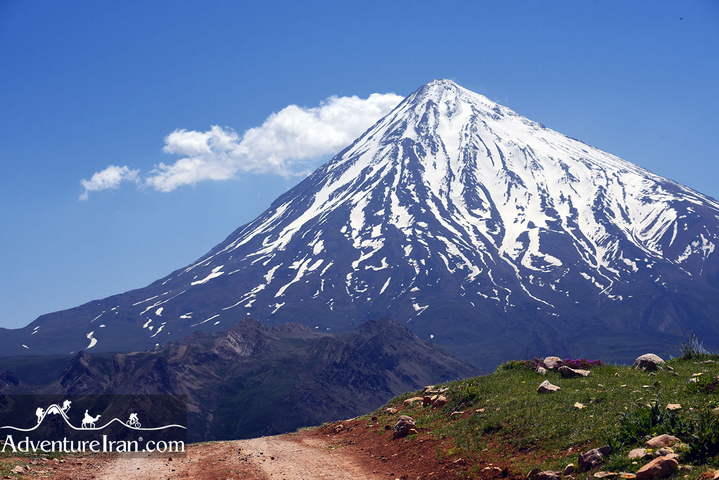