This is a voyage through a region that was the territory of Ismaelies and the famous Hassan Sabbah and his infamous Alamut Castle. The castle and quite a few other fortifications belonged to the Hashashin or what in the west is more commonly known as the Assassins. Our trek follows millennia old routes that have been established in humans which their origins are lost in the fog of time. More recently our journey was made famous by a British lady who came to these parts about one hundred years ago in search of the valley of the assassins and wrote a book about her adventures. Her name is Freya Stark and her book is available in English.

The history of Alamut Castle and this particular sect of Ismaelies go back to about 1000 years. They were able to build numerous castles and outposts throughout the mountains and maintain an independent lifestyle away from any central power. They lasted till the Mongol invasion of Persia about 300 years later during the 14th century. Their history is long and quite complex, during the trip we will have a chance to give more information and provide the chance to closely examine some of the physical remains of their structures.

Alam kuh, is the name of a massive mountain located in northern Iran in Mazandaran province. It’s located in Takht-e Soleyman massif mountain chain. Also Takhte Soliman is a part of West Alborz Mountains’ range. The altitute of Alam Kuh is 4850 m from the Sea Level and is the second highest mountain in Iran after Damavand Mountain (5610 m). Alam kuh is the center of many Mountain Activities for nature lovers.

The north face of Mt Alam Kuh is a massive vertical wall that made Alam kuh very famous mountain for all climbers around the world. The lengh of the wall rises up about 480 m vertical granite rock up to the summit. One of the main highlight is the base of the wall starts from 4400 m from the Sea level and its make the rock different for climbing. There are a lot of different route on this wall which began from 1936 till now.

The south face of Alam kuh is the only route that most of the hikers choose this one during the summer for hiking up to the peak.

We have designed this trip for hikers who would like to have long trekking in remote areas. This trip is one of our special trekking tours through the depth and breadth of Alborz mountain range and through a fascinating slice of Persian history. Passing many villages in the heart of Alborz, meeting local people and views of mountains make this journey a different one. This is a memorable trip not only because of its physical beauty and the variety of landscape encountered but also because of crossing paths with history and myth back to 1000 years a go. We start from Tehran with one day exploring tour of the valley of assassin in Alamut valley. Then, we continue to an amazing huge canyon to visit the castle of assassins. Following an old historical Hashashin trail from Alamut valley will lead us to Mt Alam kuh. In this tour, we will have 6 trekking days before reaching to Rood-Barak and Kelardasht, a village 50 km south of the Caspian Sea. There will be an optional ascend to Mt. Alam kuh (4850 m) from Hesarchal camp in the last day of trekking. The journey will finish in Tehran.

Depending on your arrival time, you will check in to your hotel in Tehran. The hotel has been booked by Adventure Iran. Overnight stay at your hotel.
2

Depart hotel after 6.00 A.M and drive towards the city of Ghazvin. We will have full day Alamut exploring and sightseeing of the Valley. Overnight stay in local house. (B, L, D)
3

6.00 A.M wake up for breakfast and start at 7.00. From Garmarud we will pick the old historic trail through the mountains and walk our way up to another historic village. Overnight stay in local house. (B, L, D)
4

We are now traveling through the heart of the Alborz range towards the Caspian Sea. This means as we progress through the journey the climate becomes more humid and the vegetation increases till we have moved from a relatively barren landscape to a fully forested area. Overnight stay in local house. (B, L, D)
5

Today after breakfast we will continue hiking through the 3000 valley up to the hot springs. We will have 2 hours or so stop at the springs. Plenty of time to soak our bodies in the rejuvenating springs. Overnight stay in local house. (B, L, D)
6

This is definitely the high Alpine day spent hiking close to glaciers and high mountain vistas. The pass we take today is around 4000m height and then will descend. (B, L, D)
7

Early morning rise up and start climbing towards Mt. Alam Kuh peak which will take about 5 hours. We stop at a point for photography from Central Alborz Mountain range. Back to the base camp and drive to the Capital. (B, L, D)
8

After breakfast the rest of the day is free to relax or follow your own interests. Transfer to the airport. Departure. (B)

The Valley of Alamut

Trekking towards the Caspian Sea 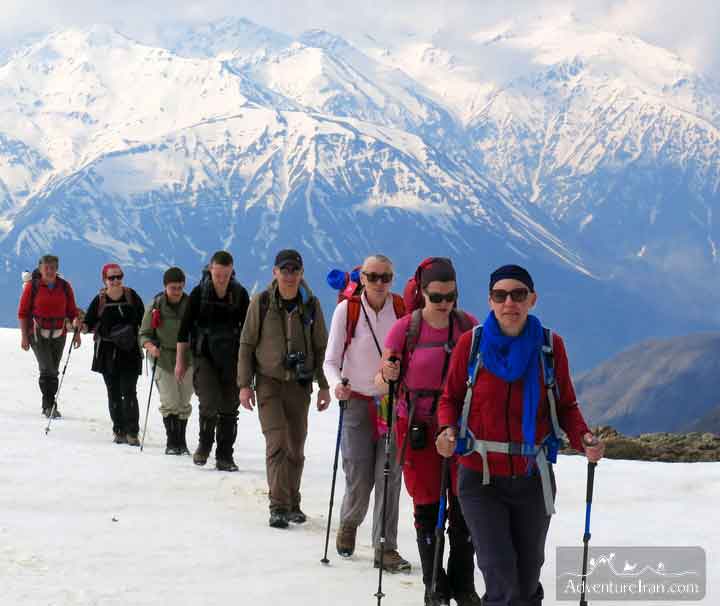 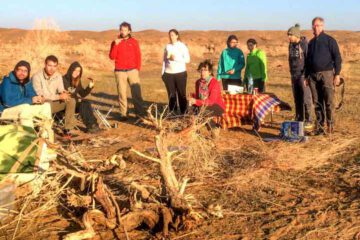 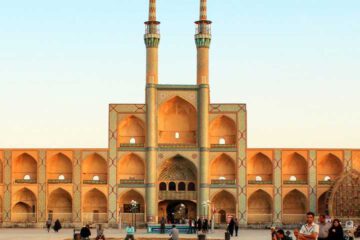 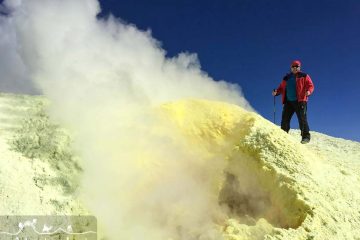