Located in an altitude of 1,600 in. above sea level, Kashan is one of the main cities of Esfahan Province and a beautiful large oasis town on the Qom? Kerman road running along the western edge of the Great Desert, Kevir. It is 240 kin. to the south of Tehran and 220 kin. to the north of Isfahan, and can be reached via a first class highway, national road, or railway from Tehran and Isfahan. The town’s population amounts to 400, 000, living on an area of 2, 100 hectares. In addition to its world famous carpets, Kashan is also well known for its silk and the glazed earthenware tile called kashi after its place of manufacture. It has long been noted for its silk textiles, ceramics, copper ware, and rose water (golab) from the well? known rose fields of Qamsar, as well.

One of the most important archaeological sites in central Iran, it has a historical background of over 7,000 years. Majority of historians and travelers to the town have called it a gate to the world civilization. Kashan flourished mainly during the Se1juq and Safavid periods of the post Islamic history of Iran. Samples of art works created by Kashani artisans can be seen in the famous museums of the world.
The town has many picturesque bad girs (wind-towers), essential in the town’s hot and airless summers before the introduction of air conditioning. Modern industry plays a part in Kashan, in parallel with the ongoing social development. In bazaar, however, carpet weaving, embroidery work, the making of rose water, scent, pottery, and other crafts are carried on, in much the same and with the same skill as of old. 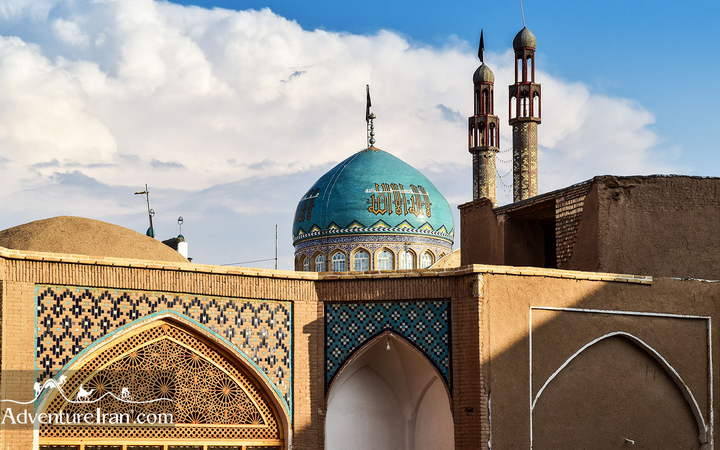 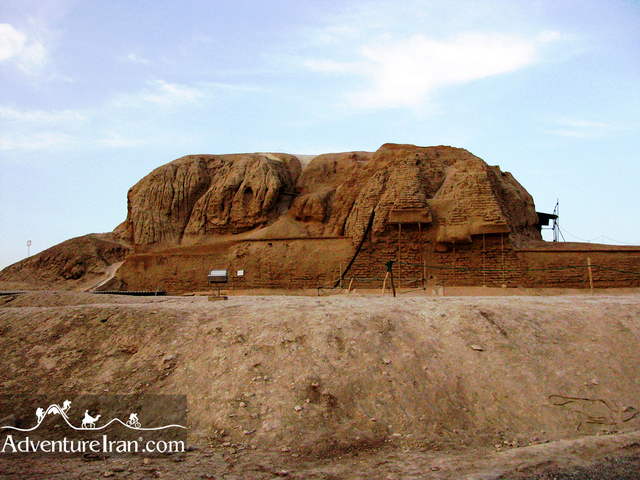 Fin Historic Gardens
Also known as the Bagh-e Tarikhi-e Fin or Bagh-e Amir Kabir at Fin 6 km. To the southwest, it serves as the finest surviving example (since 1.000 years) in Iran, and creates the contrast between the Kevir region and the greenery of the well-tended oasis below the adjoining Karkas mountain. A major part of Kashan’s water was supplied by the perennial source of Solaimaniyeh spring in the garden. Designed for Shah Abbas 1, this classical Persian vision of paradise contains the remains of his two-story palace set around a pool. The garden has other Safavid royal buildings, although they were substantially rebuilt, and others were addend in the Qajar period. The building housing Kashan Museum was built in 1968. 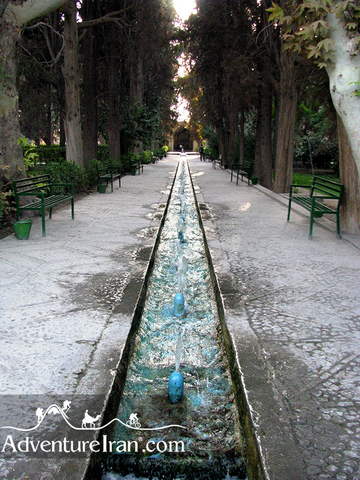 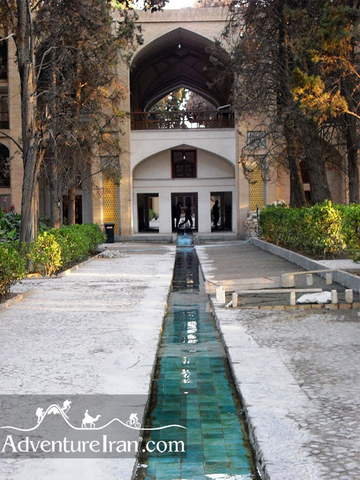 Baghe Fin, Kaslun. a 19’h century royal garden
Fin was the scene of a tragedy in 1852, when Mirza Taqi Khan known as Amir Kabir, the Grand Vizier of Naser?od Din Shah, was murdered there. He is considered a national hero and vanguard of modem Iran.

Madrasah Soltani
Known as the Imam Khomeini School, this 19th century mosque is located next to the Jewelers’ Bazaar. It attracts tourists because of its excellent plan and design, vast spaces, double-shell 27?m. high brick dome, and pleasant landscape. Altogether, there are 8 historic inscriptions inside the building. It is open to visitors every day from 8 a.m. to 6 p.m. Masjid-e Jame’, Maidan Mosque, and Soltan Amir Ahmad Shrine, are worth to be visited before going to the nearby towns of Natanz and Qamsar and Abyaneh village.

Boroujerdiha Old House
The present premises of Kashan Cultural Heritage Department, the Boroujerdiha Old House was built nearly 130 years ago by a famous merchant and landowner named HajKASHAN
Seyyed Ja’far Borouierdi from Natanz, who imported goods from Boroujerd in Lorestan Province. Its completion required 18 years of work by tens of laborers, master painters, and architects. Reception, ceremonial, and residential halls and rooms are arranged on the four sides of the courtyard. Provision of well-proportioned spaces, nicely-designed bad-girs (wind?towers) to fit the building, particularly paintings by the famous Iranian painter Kamal-ol Molk Ghaffari, have served to convert it to an art masterpiece in itself
There are many other old houses in Kashan, such as the Abbassian and Tabatabaei. 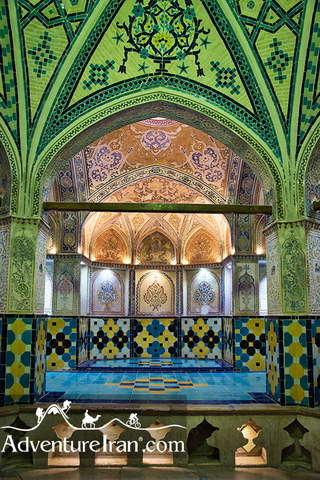 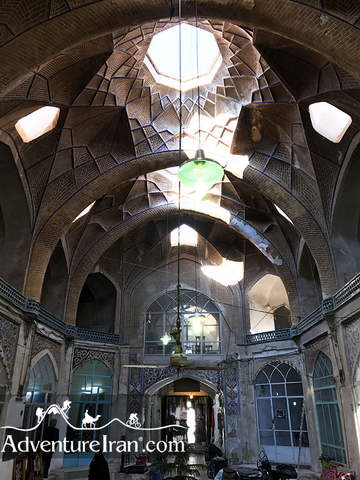 Aqa Bozorg Theological School
Aqa Bozorg Mosque and Madrasah Complex in Fazel-e Naraqi street, from the second half of the last century (Qajar period), when the country’s architects produced a number of unforgettable masterpieces. The Complex was constructed for congregational prayers as well as preaching and teaching sessions held by Mulla Mahdi Naraqhi 11, known as Aqa Bozorg. The vast sanctuary of the mosque is in two floors. The first floor,, houses 12 cells on three sides, and the mosque appears at the top floor. The building’s past has been documented in 7 historic inscriptions. 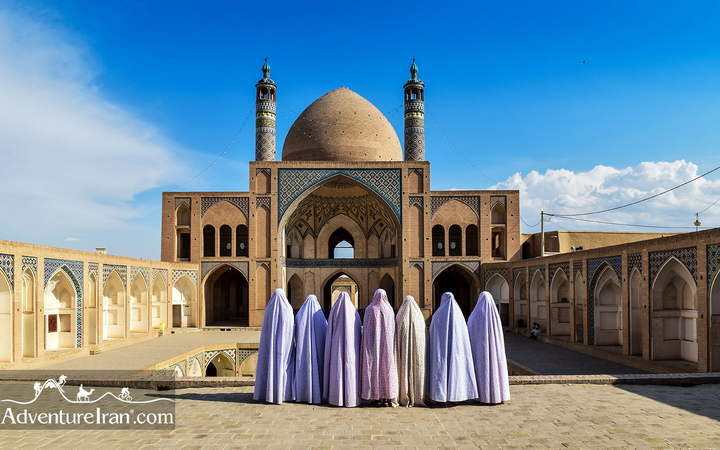 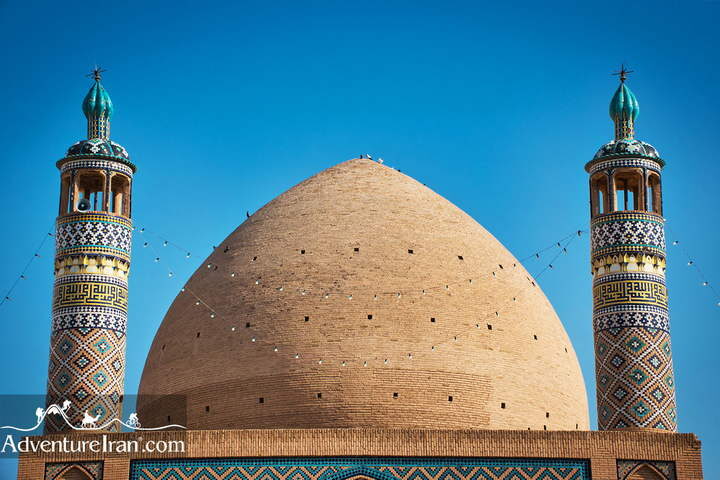 The Mausoleum of Shahzadeh Ibrahim
The mausoleum of Shahzadeh Ibrahim, built in (1894 A.D.), belongs to the Qajar period. This structure is highly interesting and attractive for possessing a turquoise tile cupola, lofty minarets, a pleasant courtyard and an iwan decorated with mirror?works and paintings. The portico and the ceiling of the iwan depict ample paintings of a religious nature on a plaster background. The interior of the mausoleum possesses elaborate miffor?works and its frieze is decorated with colored glazed bricks. 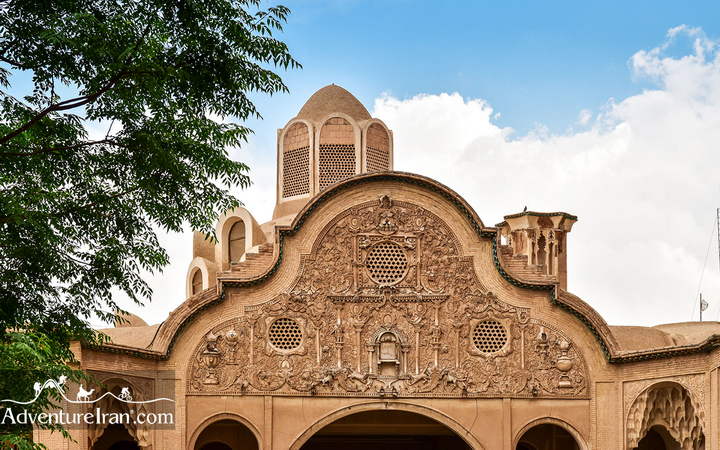 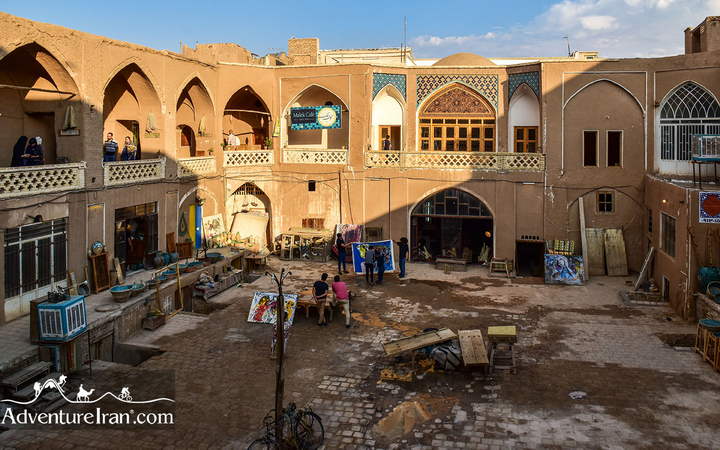 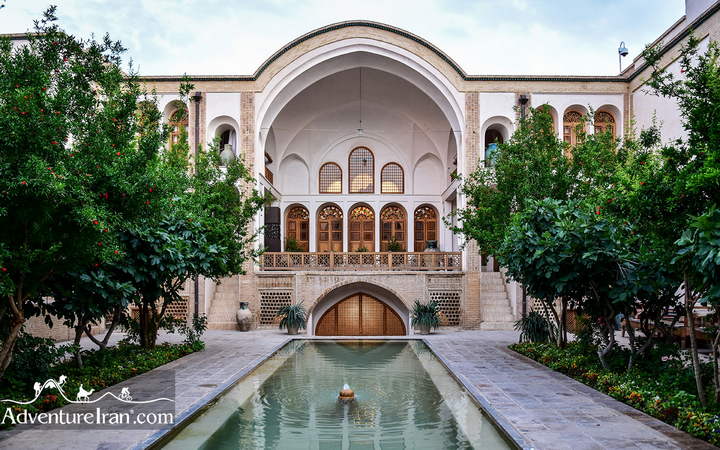