Esfahan also is written Isfahan, with a population of 1, 159,102 (1992 census), is and has been the capital of the province of Isfahan since 900 years. The elevation of the city is 1,570 meters above sea level. Giving purity to the air under the brilliant blue sky and often violet-hued mountains. It is connected to Tehran by air (regular daily flights), rail and road.

The most famous Persian description of the city of Esfahan is Isfahan nesf-e Jahan (Esfahan is half the world), which the Isfahanis coined in the 16th century to express the city’s grandeur. Isfahan, chosen and designed capital under Shah Abbas 1, was reconstituted with so many new mosques, palaces, bridges, avenues and parks that even European travelers wrote rapturously of its beauties. Knight Jean Chardin, a dependable observer according to A. U. Pope, reports that in 1666 Isfahan had 162 mosques, 48 madrasahs (schools), 182 caravanserais and 173 baths.
Isfahan steelworks started production in 1971 and is planned to double its present output of 1,900,000 tons in the coming years and make Iran self-sufficient as regards steel production. The Zayandeh-rud river watering gardens and fields with its numerous tributaries along its 360km. course, flows from west to east through the city, and divides off Jolfa and some other suburbs from the main part of the city, but most of the main attractions are to the north of the river. 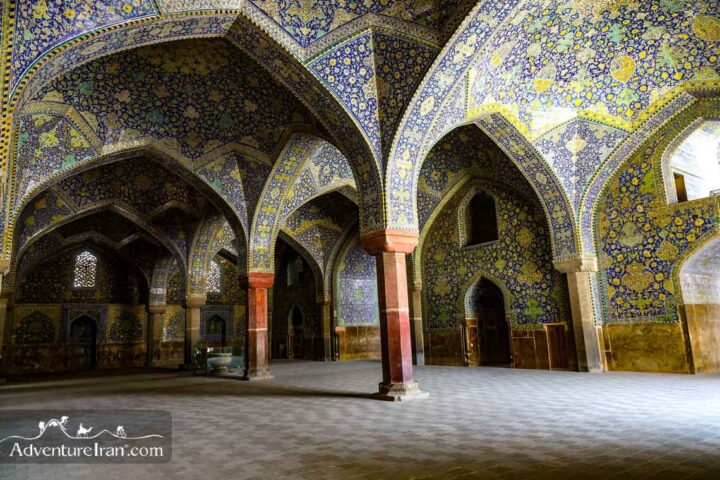 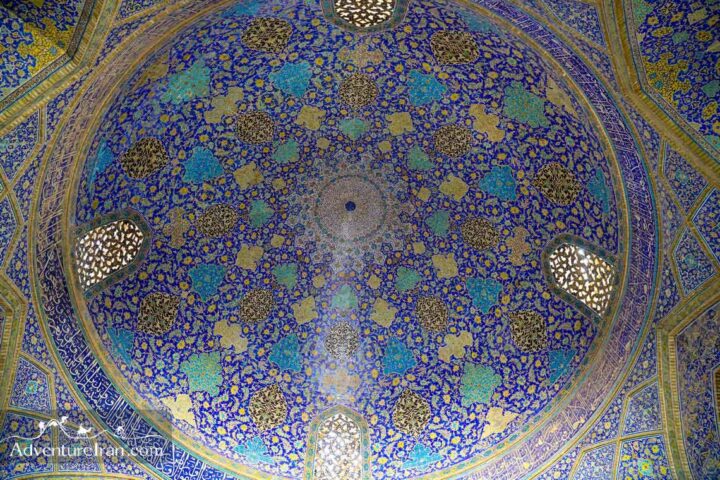 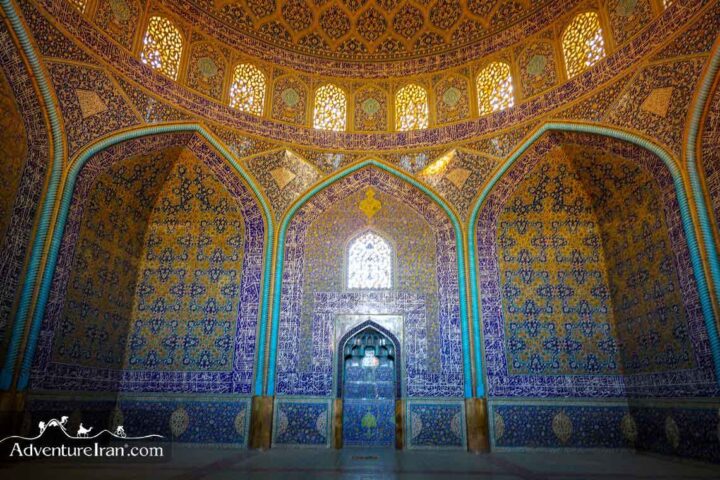 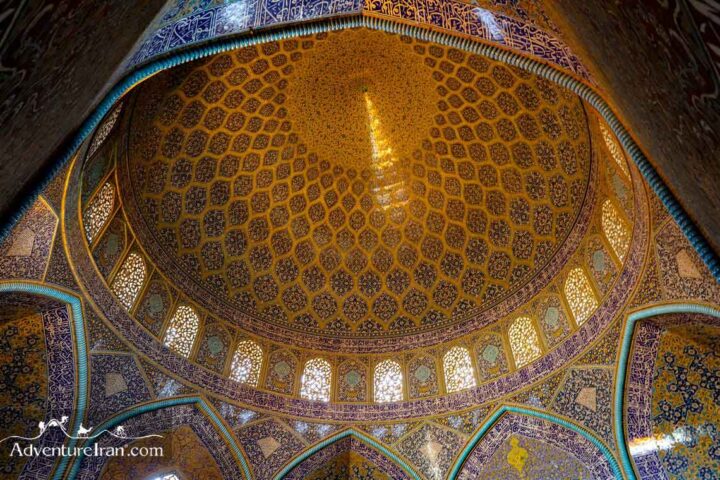 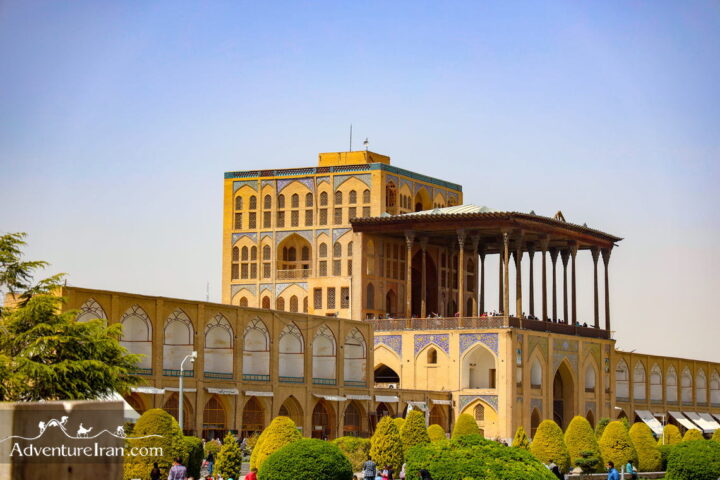 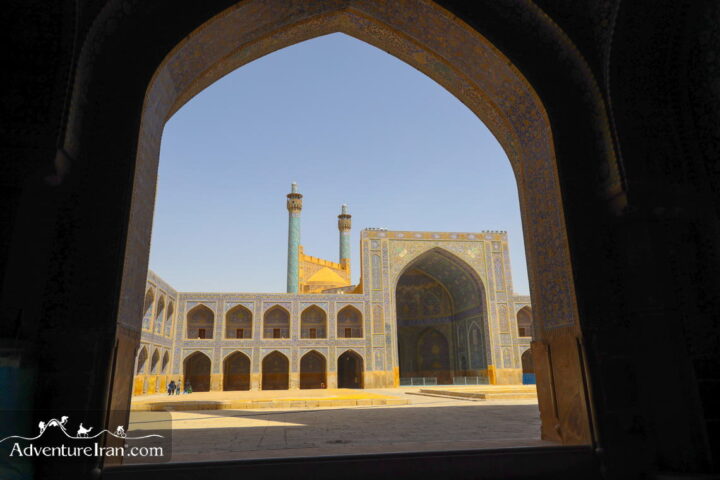 Built as a reception hall by Shah Abbas 1 (1657 A.D.) behind the Ali Qapu Palace continues the old Talar, or columnar porch. At its simplest it is only a roof-high porch constituting the facade. When attached to a royal building, it provides a huge outdoor reception hall, and is susceptible to lavish embellishments, which have included mirror-plated columns, panels and stalactites, and polychrome mosaic ceilings.
The name means “The Forty Columns”, although there are actually 20. A reflecting pool is provided to see the other 20. A more mundane explanation is that 40 was once used synonymously with many in Persian, and still is in some quarters. Walls of Chehel Sotun were covered with frescoes and paintings depicting specific historical scenes. 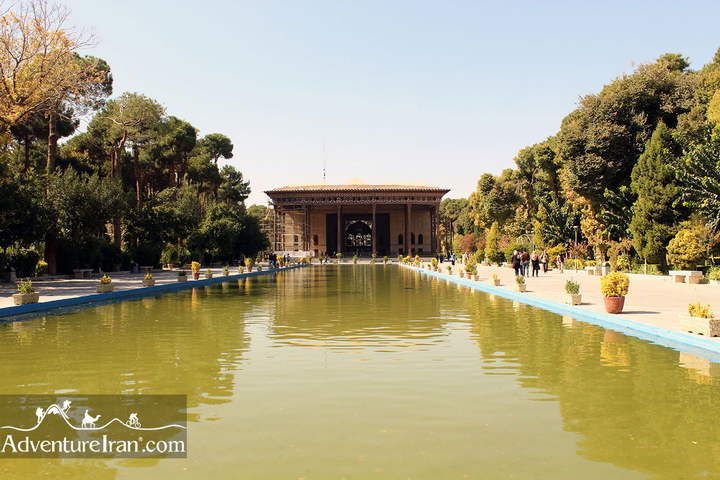 Also called Masjide Shah (Royal Mosque) before the victory of Islamic Revolution, begun in 1612, and, despite Shah Abbas’ impatience, under construction until 1638, represents the culmination of a thousand years of mosque building in Iran. The half domed arch of outer portal on the square, understood as an aspect of the square rather than of the mosque, is the most thrilling example of human artifice that could be imagined. Its height amounts to 30 in., the flanking minarets are 40 m. tall with the sanctuary minarets higher still and the sanctuary double shell dome soaring not less than 54 in. 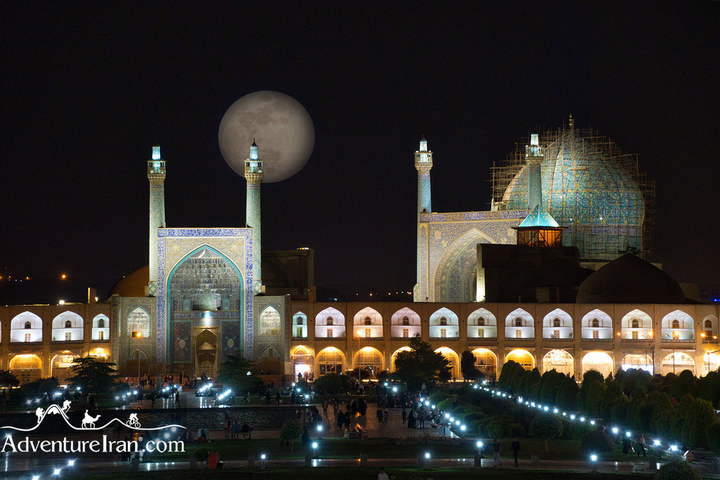 The first skyscraper of Iran with a marvelous view over the public Maidan and city to the front and the Shah’s pleasure gardens at the back, it is seven floors tall, accessible by a difficult staircase, square in plan, probably a northern type, with the Talar as the second story. All the little rooms have points of interest. A huge reception hall capable of holding two hundred or more courtiers, its interior was covered with delicate polychrome relief.
On the sixth floor, niches shaped like bowls or high stemmed flasks are dug into the wall. Their purpose is not only decorative but also acoustical, since here was a music room. Many of the beautiful murals and mosaics which once decorated the many small rooms, corridors and stairways have been destroyed, partly in the Qajar period and as a result of natural causes in recent years. 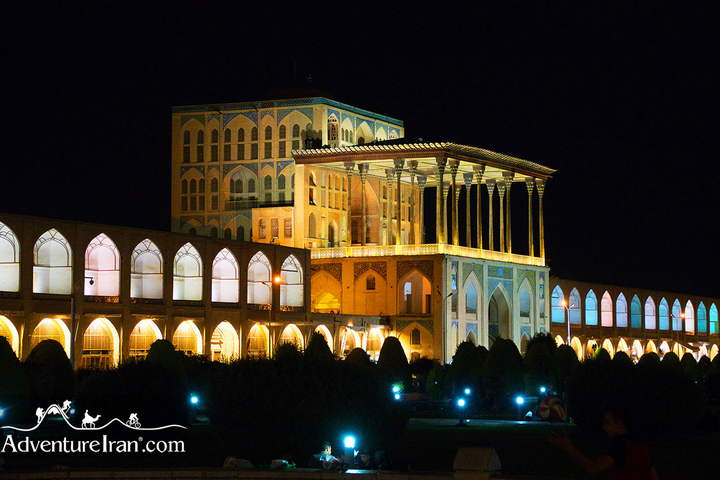 In its present state, the Talare Ashraf consists of a large hall and two adjoining chambers. The building belongs to the reigns of the Safavid monarchs Shah Abbas 11 and Shah Solaiman, (1642-1694 A.D.).
The present complex of structures known as the Talar-e Ashraf consists of the remaining parts of the Safavid palace and its golden decorations, artistic ornaments frescoes and proportionate arcades are particularly attractive and highly valuable.

The construction of this Madrasah marked the end of a sustained and brilliant period in the history of architecture. After the death of Shah Abbas I in 1627 the dynasty’s decline began, although architectural styles, developed so gradually, were a little slower in dissipating. The Madrasah was built on the initiative of Shah Soltan Hosain’s mother between 1706 and 1714, and was the scene of the execution of this unhappy monarch and the extinction of the Safavid dynasty at the hands of Afghan invaders in 1722.

Also called Masjid Jom’eh, a brisk half-hour from the square, is the most ancient and in some ways the most interesting building in the city, and hence in Iran. It was built late in the 11th and early 12th century as a focus for the town. Changes and additions were made in subsequent periods.
Therefore, it is a landmark in the evolution of Iranian sacred architecture.
It is not as immediately attractive to the external eye as the complex of Maidan-e Imam except for the tile work of fifteenth century in the great courtyard and mihrab of 01jaitu, but the complex harmony of its components makes of it a palimpsest both meaningful in its details and aesthetically pleasing in their superimposition. Every architectural age of Iran (except the most decadent) can be observed and studies in this mosque. The western Iwan is usually the first element to attract the visitor’s attention. The architecture of the apse is also different from that of the Safavid mosques: there are no pendentives or complicated stalactites to overload the vault that is made up of large alveoli of very pure design. 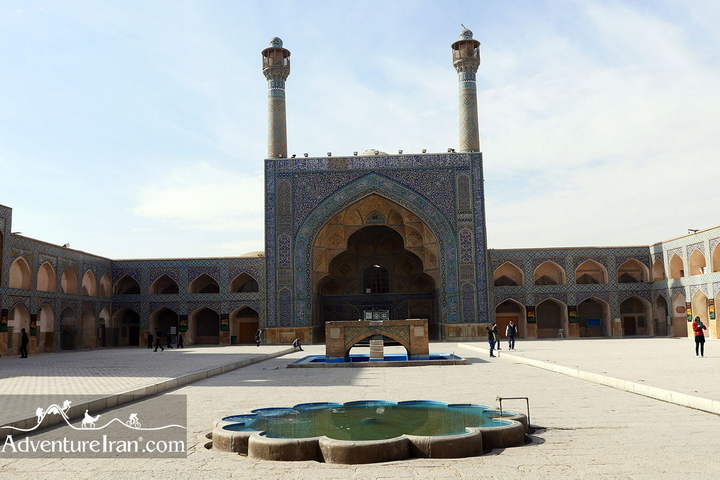 This is a world-famous architectural monument of the Safavid period in New Jolfa. The belfry faces the main entrance. There is a small museum (originally built in 1930, and moved to the present day premises in 1971) where you might be able to find a guidebook on New Jolfa in English, or someone who speaks English, as most educated Armenians do. There are as many as 13 other churches in New Jolfa as well. The next two famous ones are the Holy Mother of God and the Bethlehem. Vank Cathedral’s Press was founded in 1636 and was one of the first ones in the Middle East to print the Book of Psalms in 163 8. During its 3 5 0 years of operation the Cathedral’s Press has printed about 500 books and thousands of pamphlets, etc. 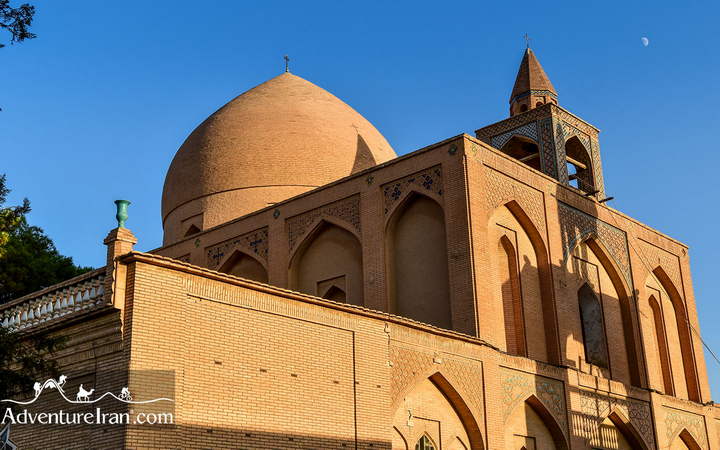 This mid17th century Safavid palace was originally surrounded by a vast garden and hundreds of similar buildings, also named Hasht Behesht (eight paradise) of which nothing remains except this interesting and beautiful palace. The existing two story palace owes its fame, apart from its architectural and decorative merits, to the lavish use of marble slabs, stalactite vault decorations, excellent tile works dotted with scenes of animals (birds, beasts of prey, and reptiles) covering the building on the outside. Structurally, it consists of a Shah Neshin (Royal Parlor), a verandah, numerous rooms, and Iwans richly decorated with gilded frescoes. 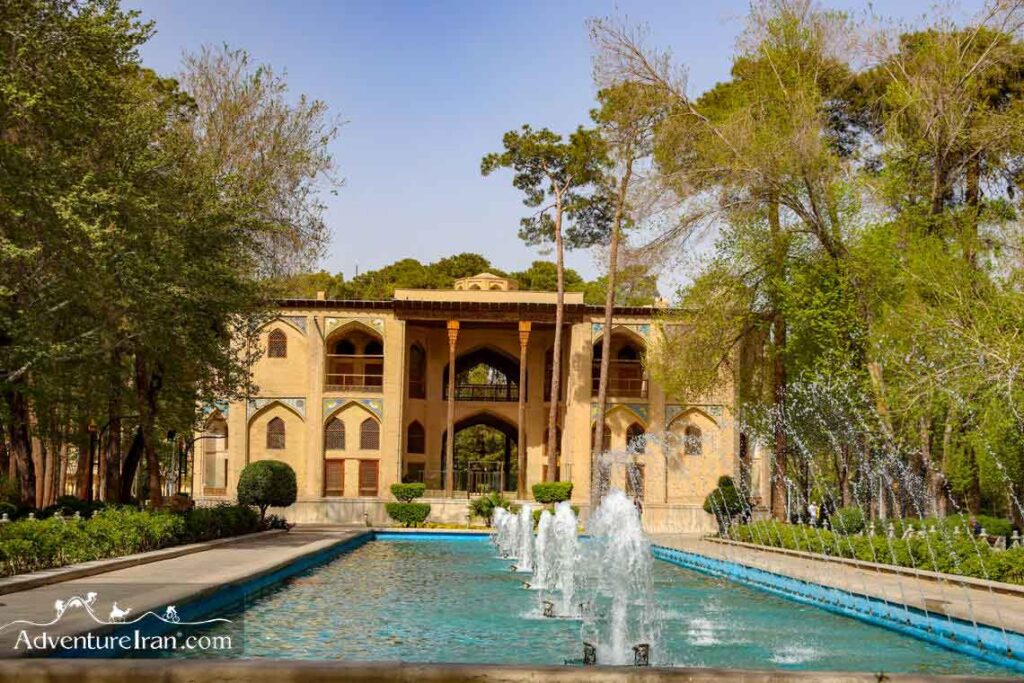 The 132m. long Khwaju Bridge, some 1.5 km. downstream (cast) of Seeo Se Pol, is slightly smaller but even more attractive, with two levels of terraces overlooking the river. Built by the order of Shah Abbas 11 in 1650 A.D., it has been constructed with two purposes in mind: to be used both as a roadway and a dam (by means of sluices, the level of the river may be raised or lowered at will). The original purpose of this dam was to form an artificial lake for some distance upstream, in front of the numerous palace buildings and kiosks that stood on either side of the river. It is now used to raise the level of the river sufficiently to fill irrigation canals on either side. But its most fascinating features are the pavilions set into the 12meter width called Shah Neshin (Royal Parlors) and once decorated with faience and inscriptions.

This bridge, built on the Zayandeh-rud at the southern extremity of Chahar Bagh avenue has 33 spans and its construction, started in (1602 A.D. ) by order of Shah Abbas 1, was completed by Allahverdi Khan, one of the Shah’s generals who had been appointed for the purpose, hence its second appellation. The bridge is 300 meters long and 14 meters wide. 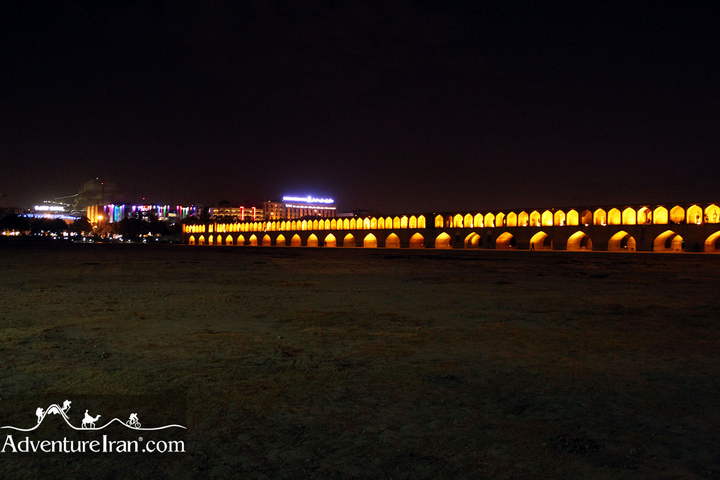 This small mosque on the eastern side of the square, is datable to the first years of the seventeenth century, and was built by Shah Abbas in honor of the great Lebanese Sheikh, who was a sort of Islamic Billy Graham of his time. The enormous dome is supported by walls 170 cm. thick, and its solidity is transmuted into lightness one would even say fragility by two features of the utmost tact and daring: a huge aperture and several high windows to trap the maximum amount of natural light, and steadily-decreasing concentric ellipses of midnight blue with delicate white arabesques vanishing to all or nothing in the center of the dome. The mihrab is decorated with mosaic tiles and stalactites, all of the highest artistic value, and the name of the architect, Mohammad Reza, is given in two tablets installed inside it. This is pure architecture, flawless and serene, and still as perfect as on the day of dedication more than three hundred years ago. No one in a receptive or contemplative mood can enter without a shock of the sense of being received into a Presence, for all its elegance, and finish it has no weakness the scale is too ample, the patterns too strong. 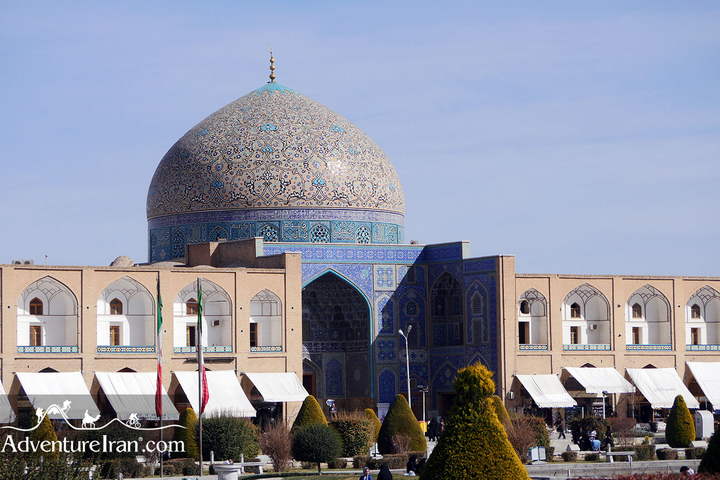 Whether on a single day business trip or a 5-day holiday, the grand bazaar of Isfahan is a must for every visitor. You can go for a short walk in the main pathway of the bazaar and get a glimpse of the colours, scents, tastes, architecture and the people of the bazaar so you have a story to tell with a couple of selfies and probably some souvenirs. However, if you can afford, in terms of time, you can spend the better part of a day to stroll down every pathway of the maze of alleys, traveling back in time form late 17th century (Safavid era, when the new Meydan or Square was built) to late 11th century (Seljuk era, when the old Meydan or Meydan Kohneh was constructed). Only the people who work in the bazaar can find their way to their exact destination, so do not even try not to be lost. Indulge yourself in what the centuries-old bazaar has to offer. The lively atmosphere of the shops and shoppers, the gleaming handicrafts, the music of the hammers and copper plates mixed pleasantly with the strong hum of the crowd under the arched roofs. Heavenly light penetrates here and there from the centre of the arches giving the floating particles a magical slow-motion effect. Whether you are here for colours, for music, for history, for photography or just her for a new experience with new people and culture, this place is the right place. Perfect for humans-of-newyork style photography. A rainbow selection of spices for gastro lovers. A tour of the old bazaar of Isfahan is a complete package in itself. Given that it’s located adjacent to the Naghsh e Jahan Square with its significant historical monuments it gives you the false impression that the visit is doable in one day which might not be the best thing to do. 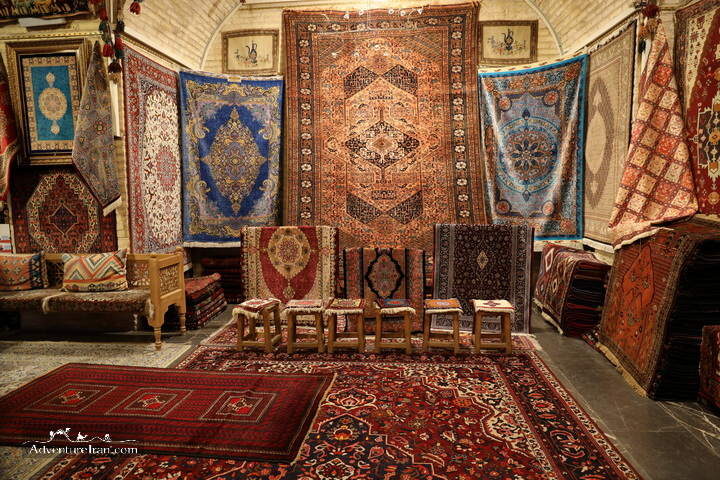 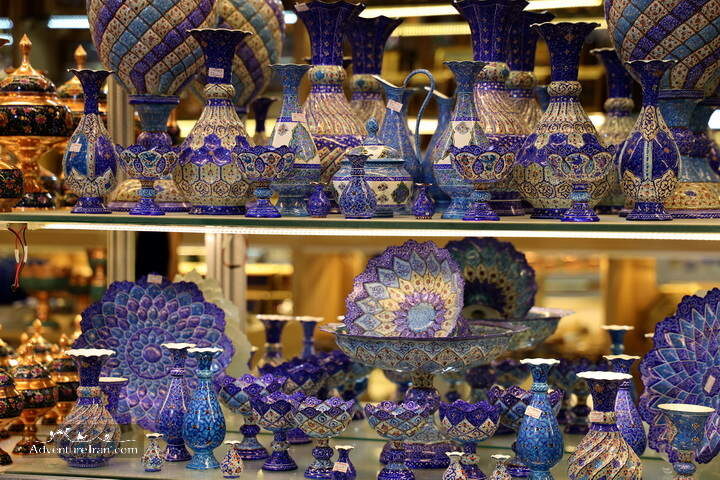 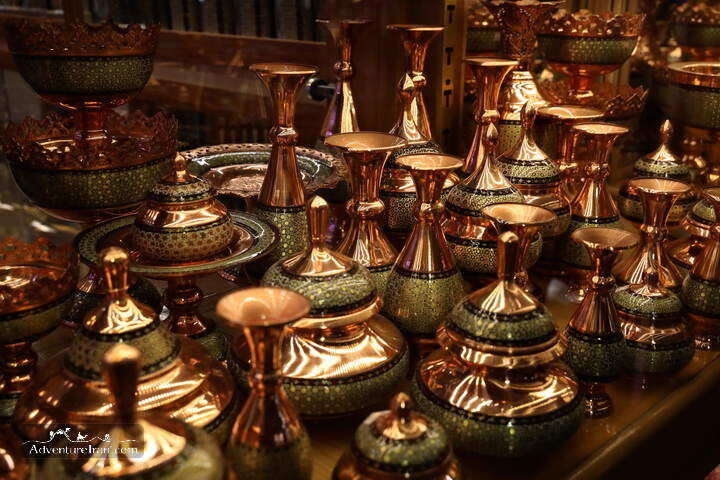 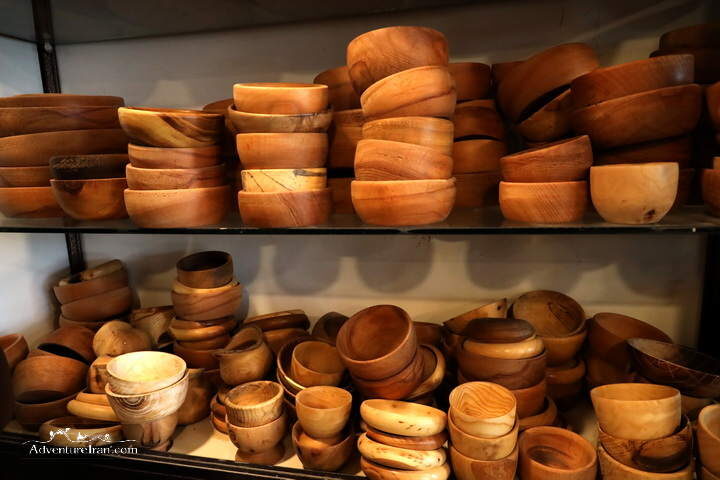 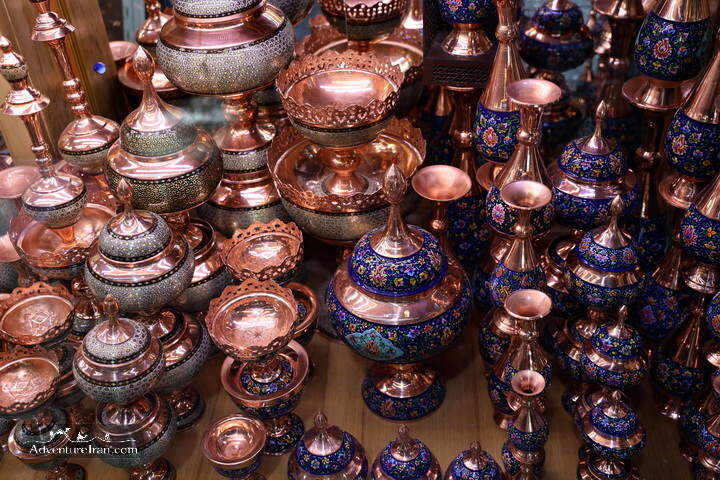 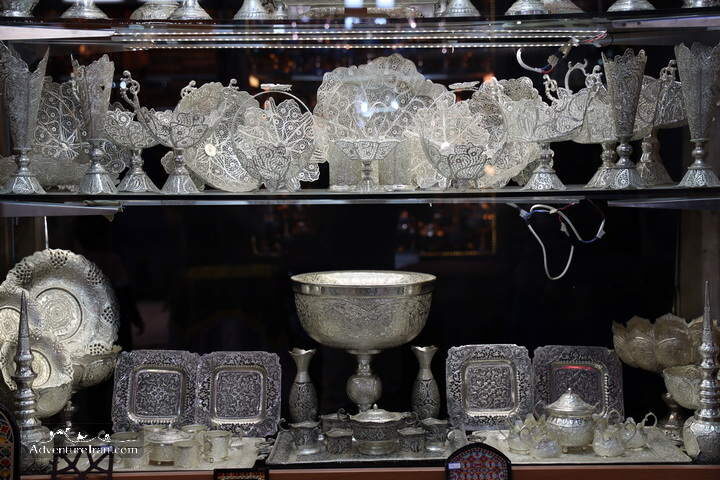 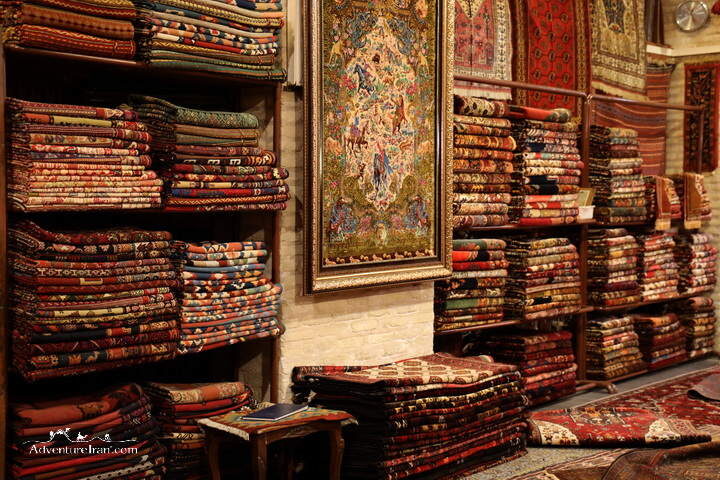 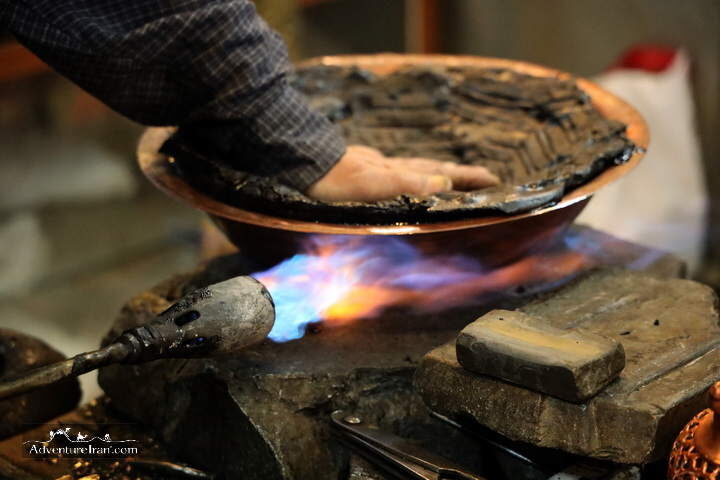 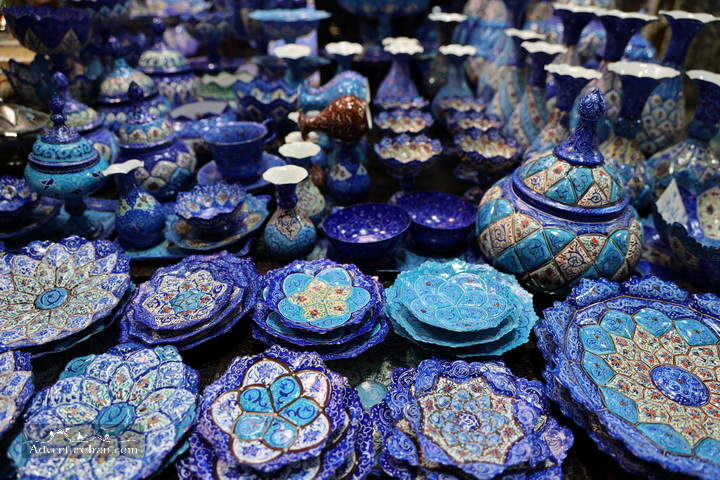 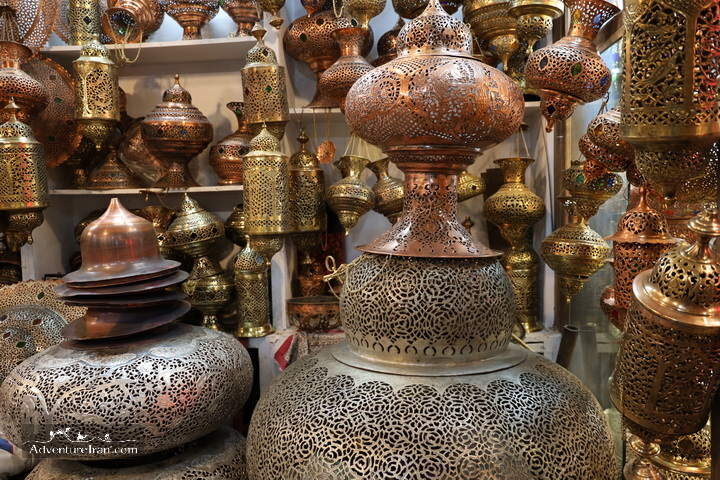 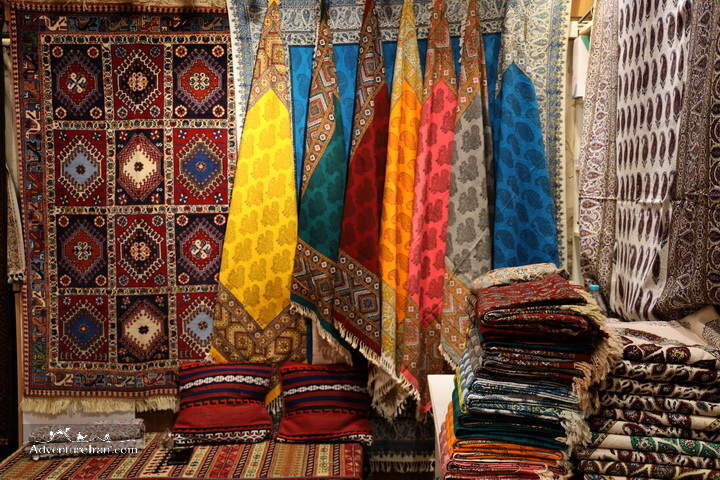