A city in southwestern Iran and capital of Fars Province in the Zagros Mountains, Shiraz is a commercial center of the surrounding region, which produces grapes, citrus fruit, cotton, and wheat. The chief products are inlaid articles of wood, metalwork, especially silver, rugs, brocades, and other textiles, cement, electronic parts, and fertilizer. It is the city of historic monuments, poets and philosophers, warriors and kings, orchards, orangeries, roses, anodizes and fragrant blossoms. With a population of 973,161 inhabitants, it lies in a pleasant green valley surrounded by high mountains, in the vicinity of Lake Maharlou. Its climate is extremely agreeable and generally temperate because of the city’s altitude (1,600 in.). During Now Ruz (the Iranian New Year beginning on 21 st March) the city becomes a field of flowers and greenery, heady with scent of orange blossoms. Points of interest in Shiraz include the tombs of the celebrated Persian poets Hafez; and Saadi, both natives of the city, the Khalili Garden, Baghe Eram (the Garden of Paradise), Baghe Delgosha, Qavam Orangeries (Naranjestan-e Qavam), Tekiyeh Haft Tanan, the Koran Gate, Vakil Mosque, Shah Cheragh Shrine, Attiq Friday Mosque, New Mosque (Masjid-e Now), Pars Museum, Bishapour (Ancient ruins, to the west of Shiraz), and Fasa and Firuz Abad (Ruins in the surroundings of Shiraz). The city is also the site of a university (1945). Shiraz was founded in the 7th century and was the capital of Iran during several periods of its history.

Hafez (1325?-1389?) is a world-famous Persian poet, who was born here into a poor family Originally named Mohammad Shams-o-Din, he gained the respectful title Hafez, meaning .1 one who has memorized the Koran,” as a teacher of the Koran. He was a member of the order of Sufi mystics and also, at times, a court poet. His poems on one level celebrate the pleasures of drinking, hunting, and love at the court of Shiraz. On a deeper level, according to some scholars, they reflect his consuming devotion as a Sufi to union with the divine. They also satirize hypocritical Muslim religious leaders. He was known as having memorized the Holy Koran in 14 versions. Hafez work, collected under the title of Divan (trans. 189 1), contains more than 500 poems, most of them in the form of a ghazal, a short traditional Persian form that he perfected. Each consists of up to 15 highly structured rhyming couplets dealing with one subject The language is simple, lyrical, and heartfelt. Hafez is greatly admired both in Iran and in the West. 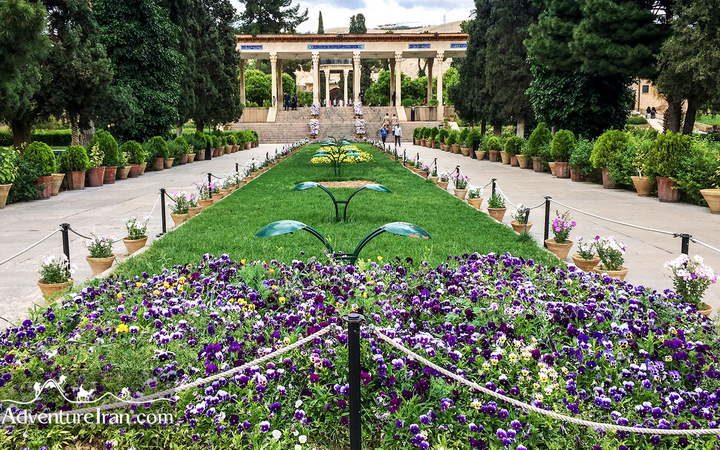 A Qashqai tribal chief, Mohammad Qoli Khan 11?khani, built the idyllic Bagh-e Eram in the early eighteenth century, planting it with cypress, pine, orange and persimmon trees, and calling it after the garden of Paradise described symbolically in the Koran. About seventy-five years later, Nasir-al Molk bought the gardens, and constructed this elegant two-story pavilion designed by a famous Shirazi architect, Mohammad Hasan, who was also the architect for nasir-al Molk’s town house in Shiraz. The tiled rooms of the lower floor lie partly underground, and are cooled by a stream of water that flows from the house into a large central pool and down this rose-lined garden promenade. 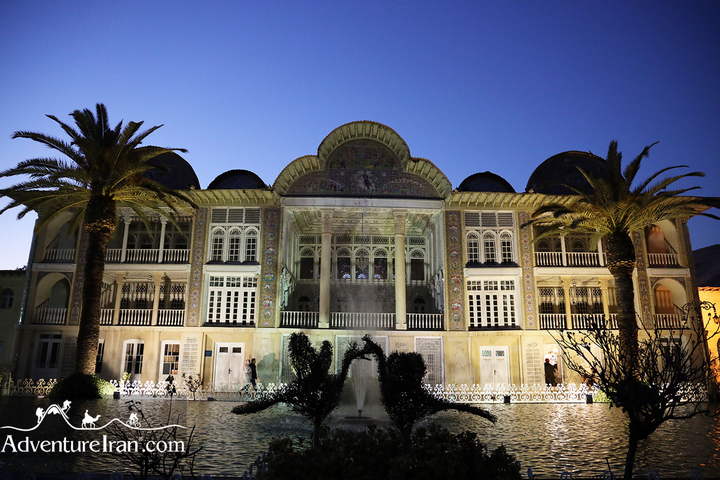 One of the best-preserved of the Shiraz houses is the ancestral home of the Qavam family, Naranjestan, which means Place of Oranges, built in the 1870s by Mirza Ibrahim Khan. The Qavam family were originally merchants who came to Shiraz from Qazvin, but soon became active in government serving under the Zand, Qajar and Pahlavi Dynasties. Naranjestan preserves the elegance and refinement enjoyed by upper? class Persian families in the nineteenth century. Living quarters for men, women and guests, working areas, cool gardens and well-equipped kitchens all cohere in this organized Persian household. The mirrored porch was the focal point of the men’s quarters and opens onto gardens lined with date palms.

The structure and tile decoration of the Nasir-ol Molk Mosque, completed in 1888, closely resemble the eighteenth-century Vakil Mosque also in Shiraz. Its western prayer hall is enclosed on the courtyard side by stained-glass doors, and is used by the congregation during cold weather. Inside, two rows of six twisted stone columns with acanthus capitals support small tiled domes. 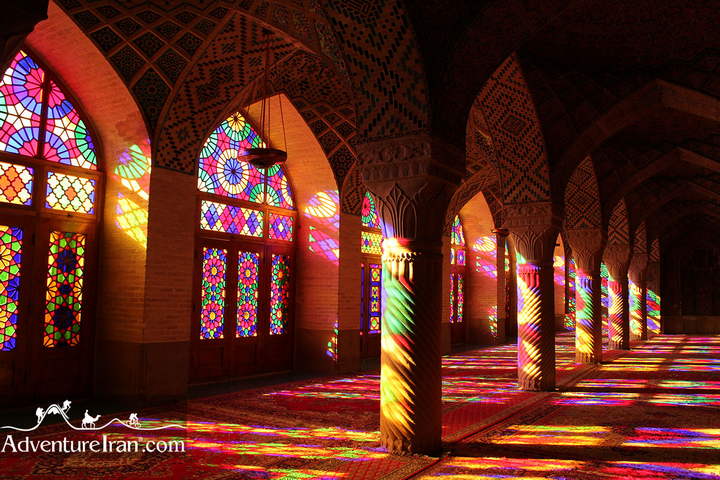 Shah Cheragh was the brother of the Eighth Imam, Reza, whose sacred shrine is at Mashhad. The tomb of this ninth-century martyr draws thousands of pilgrims annually, and is the principal pilgrimage center in the province of Fars, and one of the few Shiite shrines accessible to the discreet non Muslim. 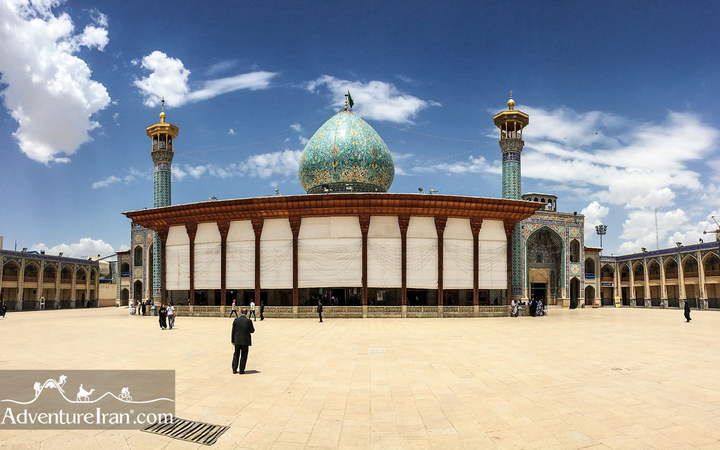 Karim Khan Zand (1750-1779) assumed the title of Vakil or Regent and ruled Persia from his capital at Shiraz. One of his major contributions was the building of the large Vakil Bazaar whose main axis cuts north-south across the city and leads into the tiled Vakil Mosque. The Vakil Bazaar was constructed of yellow bricks following the design of the earlier royal bazaar in Isfahan, and is considered by many to be the finest bazaar in Iran. 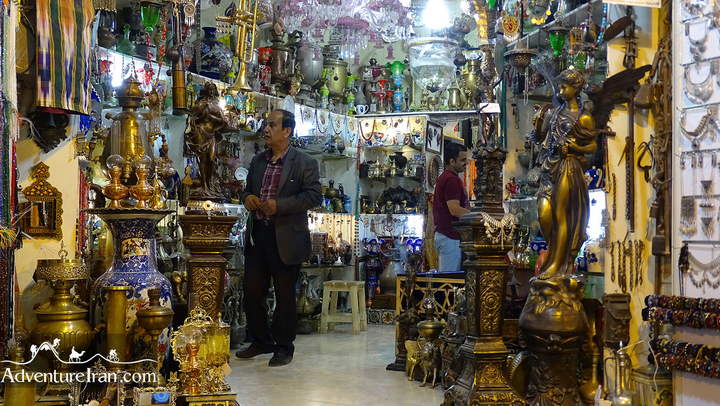 The first capital of the Iranian tribes and the Achaemenian Empire, Pasargadae is situated between the present-day Marvdasht and Sa’adatabad 130 km. to the northeast of Shiraz, not far from Isfahan-Shiraz road and less than 50 km from Persepolis. The nearby village is called Madar-e Solayman (Solomon’s Mother) in much the same legendary way as Persepolis is known as Takht-e Jamshid (The Throne of Jamshid). But there is mythology about Cyrus the Great (550-530 B.C.) and his son Cambyses 11 (530-521 B.C.) who created the military encampment and associated buildings that the visitor now sees, with a clear influence of the Mesopotamian ziggurat. 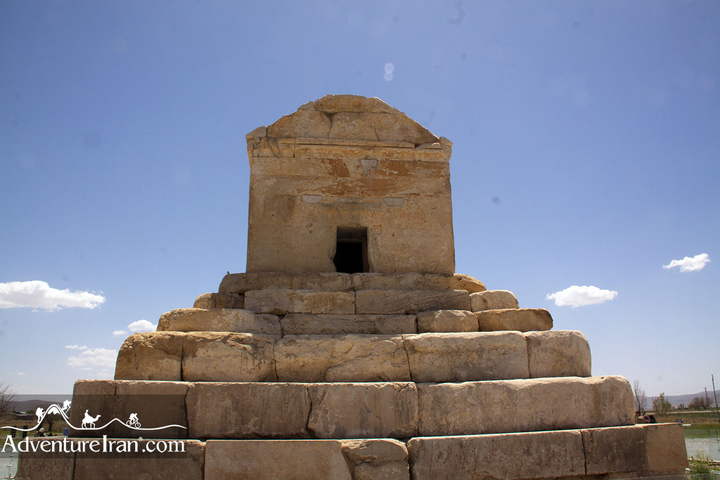